The Dickens You Say? ‘A Dickens of a Tour: Charles Dickens in Washington’

It’s November, 2001, and a group of actors are huddled around beverages and scripts at a toasty Cosi in Penn Quarter. They’re reading through a new adaptation of A Christmas Carol as part of a walking tour. The read through is revelatory, the beverages divine and then comes the realization that blocking will take place outside. As will the play. Is the director quite mad? It’s fairly chilly out there and frankly, fairly deserted. But they are a hardy crew and soon are rehearsing madly on steps and in doorways in the neighborhood.

While the actors follow their script, the director juggles a second one. Her script is the detailed history of Charles Dickens two visits to Washington City in the 19th century. And her goal is to stage each scene from Carol where Dickens himself stood. Sometimes this requires a little negotiating with those who reside in these doorways. Somehow, it all comes together and in December, 2001, Natalie Zanin premieres the show in Downtown DC.  That first show was stage managed by Cate Feeser (who also played all the ghosts) with Dwane Starlin as Scrooge, Chris Davenport as Bob Cratchit, Young Scrooge, Tiny Tim, Nephew Fred, and the Crone pawning Scrooge’s belongings. Led by Natalie Zanin who also doubled as Mrs.Cratchit and “The Solicitor”, the tour was a success. 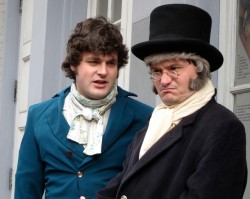 We could never tell how an audience would react to a scene. The first year, Chris Davenport was being harangued by Dwane Starlin in the “Scrooge and Bob Cratchit Office Scene”. A homeless man shouted at Dwane “Scrooge, you’re a mean old dude, give that Crutchet a raise, man!” And Dwane responded swiftly in character and the show continued without any further interruptions.

Today, A Dickens of a Tour: Charles Dickens in Washington is getting ready to perform for an 11th year in Washington. The history of Charles Dickens’ two visits to Washington City, a street theatre performance of A Christmas Carol and valuable hints on how to celebrate a Victorian Christmas including the secret recipe for the Cratchit family Christmas pudding!

A portion of proceeds is donated to So Others Might Eat and persons with military ID are half price. The actors are still playing multiple roles and this year’s cast includes: Michael Hovde, who has been with the tour for over 8 years, smoothly morphing into many character roles, Brandon Mitchell, who has been portraying Charles Dickens and Ebenezer Scrooge since 2006, June Schmitz, who joined us in 2003, portrays the ghosts in “Carol” and Nicolette Stearns (who joined in 2007) portrays Belle Fezziwig, Jemima Cratchit, a beggar woman, Mrs Dilber and Catherine Dickens and alternates these roles with our newest cast member, Desiree Gibson. In 2005, Charles Dickens great, great grandson, Gerald Dickens came and played a part on the tour. He told us it was the most fun he’d had since his street theatre days in London. He also declared that his ancestor would have been delighted by this enterprise. 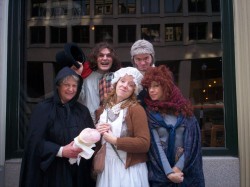 The2009 cast of Dickens . Photo by Barbara Papendorp.

It gets cold out there so the actors are layered in warm costumes with hand and foot warmers and buoyed by hot chocolate and teas. Their roles require both scripted and improvisations skills and they are more than up to the task. One year, Hungarian Radio followed the tour, the radio personality translating for her far away audience as we went along and the actors took it in stride.  And striding is the key to the success of the tour. Their quick changes take place at the “dressing room” which is a hatchback located somewhere on the tour route. It’s not glamorous, but it certainly is fun.

Purchase your tickets to A Dickens of a Tour: Charles Dickens in Washington.

Pictures of A Dickens of a Tour: Charles Dickens in Washington.
__
Natalie Zanin’s Historic Strolls website.

Natalie is Director of the Silver Spring Inclusive Company of Art Stream.