The Fantasticks at Spotlighters Theatre

If you’re looking for a classic story that isn’t quite so classic with a bit of an edgy twist then the Audrey Herman Spotlighters Theatre’s production of The Fantasticks is the production to see. Directed by Kristen Cooley with a cast of only seven, this production brings a unique life to this bizarre love story. Akin to Romeo and Juliet with feuding families, you have a girl, Louisa (Sherry Benedek) and a boy, Matt (Eric Ritter) who are in love – despite the wall between their yards and the feud between their fathers. Only this old warhorse plotline has a twist; supposing the feud was just a sham to convince the lovers of a reason to be in love? Well, supposing that’s the case then you’re in for a wild ride as this production unfolds. 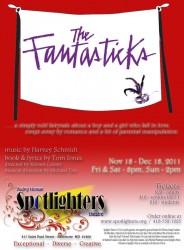 The support columns of the theatre as well as the interior walls have been painted bright blue with vivid curly whirly patterns in shades of burgundy, periwinkle, yellow, and pink layered over one another to create a sense of whimsy and fantasy for the piece at hand. Set Design team Fuzz Roark and Kristen Cooley create two gardens of the feuding families with little more than a plastic shower curtain. They split the stage diagonally with said curtain; having outlines of bricks painted on it, creating the barrier between Matt (Ritter) and Louisa (Benedek) without depriving the audience, which is seated in the round, of seeing what’s going on. Though the curtain is only semi-transparent, it is enough to make out figures and still clearly hear what actors on the other side of the ‘wall’ are saying. Roark and Cooley leave the rest up to the vibrant imaginations of the actors who build the scenes through their words and responses to the space.

This particular production has a very different approach to the play than you might imagine. It starts with the director, Cooley, welcoming the actors by their real names to the rehearsal space and handing out scripts and assigning roles as if the cast had never before met on the matter. The actors delve into a large trunk on the stage to pull out various garments – simplistic things like hats or tweed jackets, to ‘step into their characters.’ It is a very strange but not displeasing process to watch the actors transform before the audience from simple actors to characters in the show. The cast then goes about performing the show, but at random intervals break through the fourth wall and back into themselves.

There is a scene where Hucklebee (Amanda Kay Boundy) one of the fathers, finishes a relatively complex song and dance number but then she breaks character and becomes Amanda, demanding equity actor rights in a little outburst with the director who is seated at the back of the house. While the banter plays out as amusing and they eventually resume the show on stage; this particular tactic comes off as distracting. It happens again during a scene where two of the actors traipse across the stage out of costume while texting on their modern phones and ask the other actors if they want coffee. Several other instances of a similar nature occur throughout the show creating an overall disconnect between the play and the actors, which perhaps could have been omitted from the show entirely to allow the show to flow with more ease.

The actors are fitted to the roles assigned to them. Louisa (Sherry Benedek) is filled with youthful exuberance as she bubbles on about her various delusions of being a princess. Benedek gazes out to the audience with wide glossy eyes, letting the whimsical world in her head pour onto the stage expanding her dreamlike nonsense until it covers the entire house with a sense of childish fantasy. Matt (Eric Ritter) preserves the energy of a spastic youth in his projections and proclamations of his love for Louisa. He is vibrant and lively as he calls out through the wall and leaps about with gestures so grand that he could only be possessed by the emotions of a fool in love. Benedek and Ritter sing several beautiful duets throughout the piece but none so compelling as “Metaphor.” Ritter shows a full range of vocal dynamics throughout this number, going from hushed whispered pianissimos to full blown fortissimos when shouting out about love. Benedek and Ritter engulf the stage with their explosions of love in this number and it makes your heart swell to hear them sing. 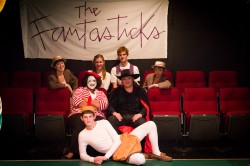 The cast of ‘The Fantasticks.’ Photo by Ken Stanek – Ken Stanek Photography.

The fatherly figures, cast as two women, present a perfect foils to their younger spawn. They represent the stubborn maturity the two children have yet to achieve, and work brilliantly together to plot against their children with the intention of happily ever after. Bellomy (Courtney Kalbacker) and Hucklebee (Amanda Kay Boundy) slink around spying on their respective children, pretending to feud and it adds hilarity to the show. Kalbacker and Boundy share a charming duet, “Never Say No” where they dance with fervor and sing with great expression on the ways in which their plans will be executed.

We see raw talent in Joey Krastel who gets thrown into being double cast at the last minute when one of the other actors fails to show up. He plays both Mortimer and Old Henry, switching back and forth between the two characters without a hitch. Krastel jumps from one side of the stage to the other as Mortimer and Old Henry are always on stage together and slides easily from the doddering old man physicality of Old Henry into the boisterous slightly cockney-accented diva styling of Mortimer. He’s a show stealer with his dual portrayal. And we can’t forget the unctuous, mysterious, bandit— El Gallo (Bart Dibicki) who doubles up as the narrator to the story. With a beautiful mellow tenor voice, Dibicki serenades us when he sings and creeps around the stage with gentlemanly sleaze as the daring bandit.

So try to remember that time in November when this show – The Fantasticks – is playing, down at the Audrey Herman Spotlighters Theatre.