The How and Why at 1st Stage

Science presents itself as a profound parallel to the lives of two seemingly unrelated women in 1st Stage’s production of The How and The Why. Directed by Lee Mikeska Gardner, the show is a tale of scientific controversy that unwinds through the lives of two women. There is Zelda (Liz Pierotti) the 56-year-old senior professor at Harvard, and there is Rachel (Nora Achrati) the 28-year-old NYU Graduate student. The women meet to discuss two poignant theories in the field of evolutionary biology: ‘The Grandmother Hypothesis’ and the ‘Menstruation as a Defense theory.’ As their differing opinions unfold, so do the intricately related details of their lives and their relationship to one another. 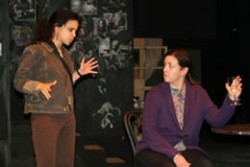 Playwright Sarah Treem (Riva Shiner Playwright Award Winner) gifts the audience with witty dialogue and sharp repartee between Zelda (Liz Pierotti) and Rachel (Nora Achrati). The subtle nuances of humor creep into her work and make it all the more enjoyable as the two characters bicker back and forth on stage. And the topics of discussion are hot. Using modern evolutionary biology to mirror the misunderstood lives of the characters is written genius at its finest; creating the potential for a dynamic show.

Taking place in just two scenes; the first being Zelda’s office at Harvard and the second being a dive bar somewhere in Boston, Set Designer Richard Montgomery creates a beautiful reality for the two actors. The attention to detail is astounding. Montgomery establishes a sense of scholarly pride in the office scene using careworn wall-paint in shades of blue and green. The office is homey and spacious, as would be expected of a senior professor. It is elegantly decorated with earth-toned throw pillows covering the bench of the bay window and a large circular throw rug, bright crimson in color that alludes to world-travel or at least expensive taste. Old tomes, various knick-knacks, and photo frames litter the bookshelf, which is carved into the wall rather than a stand-alone unit, giving it the appearance of full and well-used. The office is even a bit over-furnished having a bench and two chairs that never get used, but this is reminiscent of tenured university professors. Montgomery even adds the flair of a slightly disorganized woman to the scene by leaving stacks of research paper tossed here and there on various chairs, with a few boxes stacked up by the door. His design creates an intellectual space befitting its owner.

And Montgomery’s genius spreads further in act II. The scene switches from the well-kept, organized office to a dive bar. The contrast between the two is night and day. Again the attention to detail is exemplary; grime on the mirror at the back of the bar so filthy that you can hardly see a reflection in it. The walls are covered in white glue-stains were previous posters were hung while new ones are simply plastered up in their place really capturing the essence of a seedy development. The front counter of the bar is covered in drinks, empty glasses, straws, cocktail shakers, and napkins with trash littering the foot ledge. And the real alcohol labels hanging on the back wall of the bar; Heineken, Pinnacle Vodka, and Hennessey, add to the unsavory feel of the place. Topping it all off is the string of dimly colored lights outlining the interior of the bar counter, creating the dodgy glow of off-beat pub life. The atmosphere is enhanced by a muffled but thumping soundtrack (designed by Jeffrey Herrmann) creating the illusion that there is a wild and vivacious nightclub above them. Montgomery and Hermann, in conjunction with Costume Designer Kay Rzasa and Props Master Deb Crerie, construct a visually enticing piece with perfected atmospheres perfect for the playwright’s unique work.