The Language of Infinity at The Catholic University of America

You’ll discover new dimensions to family relations in the Catholic University of America’s production of The Language of Infinity. Set in a modern family estate in South Carolina, The Language of Infinity tells the story of a disconnected dysfunctional family whose lives have been blown in different directions thanks to the miracles of science. They find themselves all back at the family home – Zadie (Megan Dominy) the estranged daughter who has been traveling the world for six years, her twin sister Smith (Anna Lathrop) who has few secrets of her own, and their brother Ricky (Ryan Mercer) who’ is a big lawyer fighting against everything the family believes in. Add to the mix a very stereotypical southern mother hen, Elaine (Mimsi Janis) and a crazy old wheelchair-bound scientist father, Henry (Christopher Williams) and you’re in for a most unforgettable scientific disaster. With mounting levels of tensions amongst the family and major secret after secret exposed in an almost soap-opera fashion, this production will keep you on the edge of your seat as you get to know this very strange family. 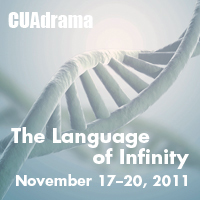 The play takes place at the Cartwright Estate, mainly inside the living room and a tiny pier outside of the property. Scenic Designer Lewis Folden creates an elegant living space on the stage. The living room is a vast expanse of mauve walls and a huge fireplace set against the back; creating the notion that this room has a high vaulted ceiling and is the home of a very wealthy family. There are several doors leading off into various pieces of the house, an angular window allowing the audience to see into the kitchen and each opening allows just a glimpse of another part of the house, enough to make the setting feel real. Folden uses large French-style doors to lead out from the estate’s living room and onto the pier, which is lined on the edge with a high wooden fence. He uses potted plants indoors and crawling ivy along the top of the fence for a nice southern touch of class. But the house never screams old southern money with all the angular décor; a bold and unique choice for the stage. A large square table in the center room with pointed seats around it and the wall mounts and pictures have sharp rectangular and square shapes, setting an intellectual trendy edge about the room with this choice. Folden covers the details as well; making sure each of the pictures on the fireplace, bookshelf and walls are pictures of the actors as if they were a family. It is a picturesque scene that really allows the family to grow.

The family bristles with dysfunction that they all try miserably to hide. Each character brings a new dynamic to the stage as they are introduced. First we meet the mother, Elaine (Mimsi Janis) who is the epitome of aristocratic southern wealth. She’s dressed to the hilt from the moment she enters her living room, wearing heels and pearls just to be decorating and cleaning up around the house. Janis holds a slow southern drawl, a convincing accent for her character, and moves with grace. She seldom loses her temper, holding her tongue and temper as you would expect a woman of her station. Janis can be heard with a crisp clear voice when she shouts to the living room from the off-stage kitchen and bustles about with an energy that screams of her need to constantly be busy. Her portrayal of this character is lively and provides comic relief at appropriate moments of tension throughout the show.

Then there are the sisters, Zadie (Megan Dominy) and Smith (Anna Lathrop) who right away create a vibe that they are twins despite looking nothing alike. You know they are sisters but the way the speak to one another, look at one another and share similarities in their physical gestures really alludes to their deeper bond as twins. They both present as mature woman with sisterly bickering veiled beneath the surface. Dominy and Lathrop are both limber and unafraid of being physically active on the stage, especially when they are impersonating various absent family members. They make great use of the large space, moving about with purpose as they discuss things and decorate the house. And both Dominy and Lathrop have moments of complete character shift later in the show. Lathrop as Smith becomes incredibly angry with both her brother, Ricky (Ryan Mercer) and her boyfriend, Jackson (Griffin Jones). She does not go for the stereotypical moves of shouting at the top of her lungs, but rather seethes with stinging words as she paces around the whole stage, pushing her point to her brother and defending her stance with her boyfriend. Dominy as Zadie has a similar moment in her dawning realization meltdown toward the end of the show where important information is revealed to her. She absorbs the information as if really hearing it for the first time and the disbelief written on her face melts into ferocious anger and heartache. It’s a stunning moment to watch.

The catalyst characters for so many of these scenes built with mounting tension come from Ricky (Ryan Mercer), Jackson (Griffin Jones) and Henry (Christopher Williams.) Williams presents a brilliant commitment to his character, being bound to his wheelchair with familiarity rather than awkwardness. He appears aloof as old ailing scientists often do and almost abstract even in his presence on the stage. There is a great parallel between his argument with Zadie (Dominy) outside on the pier, and the argument between Ricky (Ryan Mercer) and Smith (Lathrop) happening in the living room. Director Kasi Campbell makes great use of a frozen scene technique to really build dynamic levels into these two arguments. Dominy and Williams begin their argument out on the pier but at a key moment they freeze and the lights are shifted inside to Mercer and Lathrop, starting their own argument, which is oddly connected to the one happening out on the pier. This goes on for several minutes, switching back and forth, each character set freezing in turn, and the audience is able to understand everyone’s secrets through this unique use of scene-freezing.

And watch out in Act II for the melodramatic arrival of the Spirit Guide, Alvira (Bridget Grace Sheaff). Intended to provide comic relief the character portrayal is so over the top you can really empathize with the family when they’re relieved to see her leave.

This vastly compelling scientific spiritual journey is a unique production that combines science and otherworldly adventures in an unexpected but very dynamic way making the show extremely enjoyable.

So grab your test tubes and your spirit stick and come on down to Catholic University of America’s production of The Language of Infinity.

The Language of Infinity runs approximately 1.5 hours with a 10-minute intermission.