The Merchant of Venice at George Washington University

Much like the Shakespeare Theatre Company’s recent production of The Merchant of Venice,the George Washington University production of this well-known piece is also set in a more contemporary setting and not 16th century Italy. Director Leslie Jacobson makes the interesting decision to set the show in 1898 London and the English country-side (Belmont). For the most part, this decision works and demonstrates that intolerance and suspicion of those who may be different from us (due to religion, ethnicity and the like) transcends both time and place. 19th century London, as dramaturg Rebekah Meyer notes in the program, was fraught with xenophobia- an interesting parallel to 16th century Italy. Indeed, some of the situations played out in the script (for example, the difficulties that can emerge when loaning money) are also quite relevant to today with all of the economic and social unrest plaguing our increasingly globalized world. 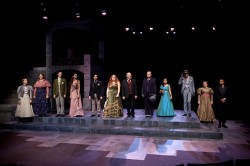 The cast of 'The Merchant of Venice.' Courtesy of George Washington University.

With England as a backdrop, the cast of 11 actors (some double or triple cast) from George Washington University’s Theatre and Dance Department, as well as DC powerhouse actor and guest artist multiple Helen Hayes Award winner Rick Foucheux, get the opportunity to stretch their acting skills and play a variety of well-known interesting and complex characters.

While the cast is uniformly quite strong, four particular actors deserve special mention. First and foremost, Elyse Steingold as Portia steals the show. Evoking great confidence and comfort on the stage, she handles Shakespeare’s beautiful and emotion-filled words with considerable ease. Nearly every carefully selected acting choice is spot on and it’s clear she understands her character- what motivates her, what she needs, and what she wants. Her scenes with her potential suitors (Maxton Young-Jones, David Neiman, and Matt Rist, all strong actors themselves) are particularly strong as are her initial scenes with her confidante Nerissa (a charming Christianne Liongson) as both women explore what they want out of life and love.

It’s no surprise to me that Rick Foucheux handles the role of Shylock, a Jewish moneylender, so well that he makes it look easy. As one of DC’s strongest actors, he’s always been versatile and engaging and this performance is no exception. His skill brings out the best in the young actors that share the stage with him. Though Shylock only has a few scenes in the play, they are key ones to the plot. Mr. Foucheux is particularly strong at the end of the play as he and the merchant Antonio (a very secure Zack Shelton who commands the stage in his leading role) both deal with the hand they are dealt after their financial deal goes awry. Though he says not a single word at that moment, his emotion is clear. Maxton Young-Jones also deserves special mention. In addition to playing one of Portia’s potential suitors and a jailor, he also portrays Lancelet Gobbo, the mixed race servant to Shylock and then Bassano (Portia’s love interest, played by the very likable and natural Matt Rist). Young-Jones brings just enough comedy to the role without being too campy and exudes a kind of natural energy on stage. His scenes with his mother are particularly effective. Lizzy Marmon handles the largely comedic role of Old Gobbo (Lancelet’s mother) with remarkable skill. Her physical comedy skills are first rate. We later see another side of her as she portrays Salanio (friend to Portia). Madeline Hendricks (Jessica), Siobhan McGowan (Salarino), Matthew Nickley (Gratiano), and Caitlin Simpson (Duchess/Rosa) round out the young cast; they all show great promise as actors. 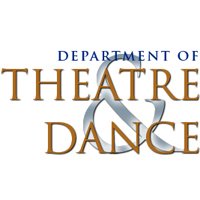 Not only is the cast strong, but the production values are first rate. Deserving special mention is Jonathan Rushbrook’s scenic design. Since the play takes place in several locations, his set needs to reflect each of them- a café near the water, the streets of London, a courtroom, Shylock’s house, and Portia’s estate. Using three or four large set pieces and several props he captures the unique ambience of each of these locations. His design for Portia’s estate and Shylock’s house is particularly effective- the stone exterior is a nice touch. However, because the set pieces are so cumbersome, the transitions between scenes aren’t always so smooth though the assistant stage managers make a herculean effort to move things along.

Jenny Bernson’s costume design (largely using traditional 19th century garb) is effective in distinguishing between class and ethnicity/religion of each of the characters. Since the play is largely centered on those issues, this is very important. Carmen Gomez’s lighting design is minimal, but she meets the challenges of the space quite well. The actors are required to move about the aisles in the theatre and her lighting design allows this to happen without being too disruptive to the audience. Ashley Chen’s sound design of classical music is mostly used to transition from scene to scene. It is also heard very strongly in the second act as it is underscores the action without being too obvious, intrusive, or distracting. It’s a nice balance.

Overall, this is a very strong production. Though the pacing could be improved in several areas, it’s clear the GWU team has put a lot of effort into it and should be commended for putting on a quality production of a difficult play. I look forward to seeing future offerings from its theatre department, but even more importantly, I look forward to seeing the actors in this play grow in their craft. They all show good promise.