If you have found some productions of Shakespeare’s history plays to be on the dry (maybe even dull) side, then try WSC Avant Bard’s spin on the Henry IV Parts I and II (with a bit of Richard II and Henry V thrown in for good measure).

WSC Avant Bard has created a work largely based on the Henry IV plays, but for those Shakespeare purists out there, you will find the play to be very much a new work filled with lively songs and political skits that work around key elements and portions of the Henry IV plays. WSC Avant Bard and director Tom Mallan immerse us in Sir John Falstaff’s bawdy world, the good and the bad of it, in their own unique ways. While this might offend purists, I found the concept to be enthralling and entertaining, even when it pushes boundaries further than we expect. 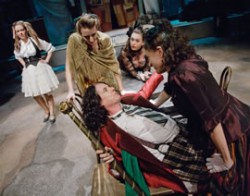 The play is largely set in what looks to be an Edwardian burlesque hall, with large tables used to great effect, sometimes as a catwalk and stage extension for the many wonderful ballad and anthems (composed by Raymond Bokhour) and lavish dance hall numbers (choreographed by Mundy Spears). News footage of royal news events are depicted on a screen above the set (from the defeat of Richard II by Henry IV to the coronation of Henry V) while the burlesque actors (dubbed the Harlotry Players) act out the very scenes shown on the news reel to hilarious effect. Many of Falstaff’s companions are played wonderfully by women (another Shakespearean tradition broken! along with men in drag) including Kari Ginsburg as Doll Tearsheet, Cam Magee as Mistress Quickly, Richard II and Northumberland and Ashley DeMain, who plays a hysterically funny Douglas in the reenactment skits. The more than 20 actors are used well to convey the revelry and lewdness of the locale.

As the title hints, The Mistorical Hystery of Henry (I)V focuses more on the Prince Harry or Hal (who becomes Henry V) aspect of the Henry IV plays and specifically his relationships with Falstaff, his mentor in merriment, and Harry’s other companions in carousing. The WSC Avant Bard spin especially plays up a passionate relationship between Prince Hal and companion Ned Poins (a striking James Finley). The political intrigue involving Henry IV and rivals Hotspur, Worcester and Douglas also featured in the Henry plays is told through the news reels and the skits reenacting them by the Harlequin players. This might offend purists of the Bard but I found it to be a brilliant way to portray the often stodgier historical aspects of the Henry plays. The WSC Avant Bard production also contains key poignant scenes between Prince Hal and his father.

Christopher Henley plays a terrific Falstaff, conveying his joviality and self-deception brilliantly and appropriately plays Harry’s other father Henry IV. Jay Hardee is great fun as the frolicking Prince Hal, which makes the character’s stark betrayal of his companions in the second act sting that much more. 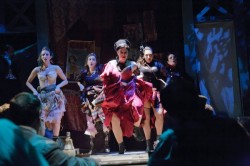 The zany period costumes (by Rhonda Key and Lynly Saunders) are fabulous, as is the colorful yet exceedingly functional set (with terrific patchwork curtains) by Tobias Harding and effective lighting by Alex Keen. Live musicians (including piano player and musical director Mickey Daniel DaGuiso) play on stage as part of the lively burlesque hall proceedings, which really enhances the musical aspects of the show.

Running time: Two hours and 40 minutes, including one intermission.