The Sound of Music at Olney Theatre Center

The Sound of Music is a five star production you don’t want to miss! The Olney Theatre Center production of popular Rodgers and Hammerstein musical features a cast made in heaven, incredible stage design by James Fouchard, and an orchestra filled with talented musicians – lead by Helen Hayes Award-winning musical director Christopher Youstra. The ecstatic audience that packed the theatre on Saturday night loved the production and responded with thunderous applause throughout the evening, which climaxed with a well-deserved standing ovation.

As Maria – Jessica Lauren Ball’s portrayal of Maria is heartfelt and sung effortlessly in her beautiful soprano, and you could see she was enjoying singing her showstopping songs almost as much as the audience enjoyed hearing her perform them. Her musical performance is a joy to watch and hear. Her opening version of “The Sound of Music,” is simply gorgeous and the audience responded by cheering and applauding loudly. You knew after hearing her performance that we were in for a wonderful night in the theatre. Jessica’s duet with Mother Abbess (Channez McQuay) of “My Favorite Things” was humorous and beautifully sung. Her interaction with the Von Trapp children was genuine and heart-warming, especially during ‘Do-Re-Mi,” which featured the beautiful blending of the talented young performers’ voices who made up the von Trapp family (which Maria would eventually join). Tracy Lynn Olivera’s performance of “Climb Ev’ry Mountain” shook the rafters of the theatre and reminded us how powerful the song is. What a way to end the first act! [note: Tracy Lynn Olivera came in to sing the song because Channez McQuay had some vocal difficulties during the performance].

Jeffrey Dorman does a great job with the sound. The audience could hear the singing, the dialog, the effects, and the orchestra with ease. Christopher Youstra and his six- member orchestra accompany the cast in their musical numbers, and never drown out the performers. They were not seen, which was a wise decision because they did not distract what was happening on the stage, but they they made their presence felt with their gorgeous playing.

Take a bow Scenic Designer James Fouchard for your breathtaking set design! You created a set worthy of Broadway, especially the mountains,  the von Trapp villa, the chapel and the Abbey. Just stunning!

Jeanne Bland and Seth Gilbert created an array of simple, elegant and colorful costumes for this production. The Nuns outfits made them look like they were from a real abbey. The uniforms for the children all matched and all looked appropriate for the time period and place

The von Trapp children are incredible throughout The Sound of Music. Their chemistry and love for Maria is contagious. Their singing of “Do-Re-Mi,” and “The Lonely Goatherd” are lovely and joyful. Their rendition of “So Long, Farewell” is charming.  These young actors perform like veterans and I’m sure we’ll see may of them in future local productions. 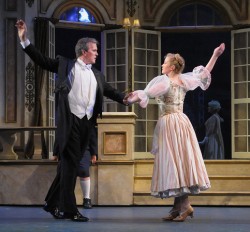 The audience is introduced to Liesl’s romance with the song “Sixteen Going on Seventeen” performed with innocence and playfulness by Donovan and Danny Yoerges (Rolf).  The two entertain the audience in this number and highlight Director/Choreographer Mark Waldrop’s choreographing skills. The reprise of the song with Donovan and Ball in the second act is a treat and is one of the highlights of this production.

Heidi Kaplan is charming as Gretl, the youngest of the children. Her reprise of “The Lonely Goatherd” in act one is delightful. Her interaction with her siblings and other cast members is entertaining, especially during “So Long, Farewell.” 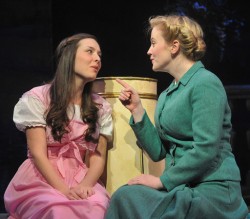 Broadway veteran George Dvorsky returns to Olney after his critically acclaimed performance as Daddy Warbucks in their recent production of Annie. And as the stern but loving father of the large clan of children, Dvorsky lends his gorgeous voice to a memorable rendition of ‘Edelweiss’ and the duet “Something Good” which brought beautiful harmonies with Jessica Ball. They make the perfect couple.

If Saturday night’s crowd was any indication, tickets will be hard to get, so I suggest you run and buy them now. The audience gave the performers the loudest applause and the most well-deserved standing ovation I have seen this year.

Olney Theatre Center’s production is one my favorite things I have seen this season. It’s the perfect holiday show to take the whole family to.

Running time: 2 hours and 45 minutes, including one 15 minute intermission.