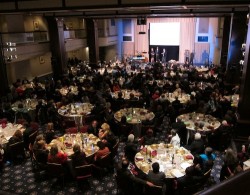 On Monday, November 7, 2011, The Theatre Lab School of the Dramatic Arts held its annual Cabaret Benefit. The evening featured silent and live auctions, dinner, performances from some of the Theatre Lab’s many talented students as well as its directors, Buzz Mauro and Deb Gottesman. However, this wasn’t just another boring fundraiser. The evening was a testament to the Theatre Lab crew who so enjoyably meshed together raising financial and community support for its wonderful programs, providing great entertainment, and, at the same time, serving an elegant dinner. The audience was packed into The Sphinx Club at Almas Temple, and included many special guests including DC Mayor Vincent Gray, Tom Sherwood, Jim Vance, and Doreen Gentzler.

For those of you who are unfamiliar with it, the Theatre Lab provides theatre education to more than 1,000 adults, teens and children in the DC area each year. Many of the non-profits programs focus on bringing arts education into the lives of youth and disenfranchised populations such as the homeless and incarcerated. Two of the star performers in their excellent production of Ragtime, testified to how the scholarships they received to enroll in the Theatre Lab’s courses had changed their lives. In addition, the Theatre Lab has been featured in the Catalogue for Philanthropy as one of “the best small charities in Washington.”

The Cabaret Benefit is a fun, energetic event that is a good mix of presenting the work that the Theatre Lab does during the year and entertaining the audience. The live auction prizes ranged from a vacation to Disney World to a behind-the-scenes news package including a tour of Meet the Press and lunch with Jake Tapper.

But the highlight of the evening was Kenneth Washington and Ashley Nicholas’ rendition of “Wheels of a Dream,” which received a prolonged standing ovation. Buzz Mauro and Deb Gottesman’s original piece, “One Perfect Song,” showcased their considerable talents and humorously lamented how their students’ performances at the Benefit had supplanted their own. The evening moved quickly and kept up an entertaining energy.

If you have an interest in acting or would like to learn more about The Theatre Lab, check out their website. Also keep an eye out for next year’s Cabaret Benefit, which marks the 20th anniversary of the Theatre Lab. It will be held at the historic Mayflower Hotel. This is an amazing local non-profit arts organization and they are proving every day that theatre has the power to improve people’s lives in tangible ways.