A Christmas Carol at Ford’s Theatre

Since 1979, Ford’s Theatre has been presenting what is the quintessential holiday attraction in DC: a production of A Christmas Carol. For the past three years, Ford’s has been presenting a knockout production that has something for everyone – great acting, snow, flying and a bunch of surprises I won’t reveal. This visually stunning version, directed by Michael Baron, is a family pleaser, and is one of the hottest tickets in town. 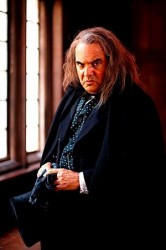 Once again, Ebenezer Scrooge is played by four-time Helen Hayes Award-winning actor Edward Gero, who proves once again why he is one of DC’s best actors. Unlike some actors who have played the role, Gero actually brings humor to his character. His is not a one-note brooding performance like some actors do when they portray the miserly Scrooge. You experience Scrooge’s total transformation from humbug to joyful in his performance.

As Bob Cratchit, Christopher Bloch delivers a heartbreaking performance as the father who is just looking to provide for his family. It’s touching without being maukish.

Anne Stone delivers a great performance as the Ghost of Christmas Present. She is decked out to the hilt in a glittery costume and she commands the stage in her scene. Drew Eshelman is wonderful as the chain-clinking Marley and Felicia Curry as Ghost of Christmas Past flies around the stage with great ease. Stephen F. Schmidt delivers a great turn as the inventor Mr. Marvel – while driving around in a steam- powered car.

Lee Savage has created a set that depicts Victorian England perfectly. It has a footbridge that rises and lowers at various points in the production, plus moving parts in Scrooge’s bedroom. Savage has also created some very snazzy-looking vendor carts and a few other surprise pieces as well.

Alejo Vietti and Rui Rita have created with their costumes and lighting respectively the perfect complement to the set. Mr Vietti’s costumes for Ghosts of Past and Present were my particular favorites and Charles G. Lapointe’s wigs add another layer to their designs. Rita’s lighting effects are eye-popping to say the least. Check out Marley’s reveal.

There are of course Christmas carols in A Christmas Carol and a big festive dance version of “I Saw Three Ships,” choreographed by Shea Sullivan. The choreography is accompanied by a soundscape created by Joshua Schmidt. Mr. Schmidt has captured the period in the musical sections and his effects serve the production nicely. 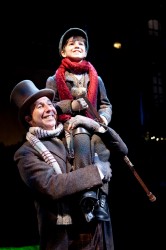 The cast is vocally directed by Jay Crowder and they all sound marvelous particularly in the Act One finish of “What Child is This”. Director Michael Baron has staged the show in such a way that it keeps the audience on the edge of their seats the entire show. Even though you know the story, there are numerous visual surprises in the presentation to keep it interesting.

I also recommend getting to the show a little early to take a tour of the museum in the basement of Ford’s where you can learn a lot about the ill -fated night Lincoln was assassinated. Your show ticket gets you in and it is well worth it. 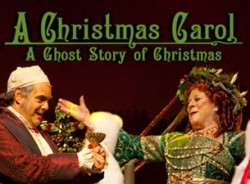 For sheer enjoyment this holiday season please run – don’t walk – to Ford’s Theatre’s production of A Christmas Carol. This is no humbug -it’s the real deal.

Running time: One hour and 50 minutes, including one intermission.