‘A Christmas Carol’ at Maryland Ensemble Theatre’s The Fun Company 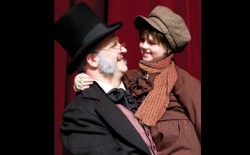 I attended a special matinee for A Christmas Carol for local school children at The Carroll County Arts Center. Imagine a theatre filled to capacity with restless elementary school students just unloaded from their school buses. They are corralled into the theatre to take their seats. The lights go down and the production starts. The children are captured by the magic of theatre for the next 90 minutes and are well-behaved! The kids loved it!

Julie Herber, Director of the Maryland Ensemble Theatre’s Fun Factory did a great job helming  the show. Not only did she direct, but she also designed the costumes which transported the audience to the 1800s in London – complete with top hats, long coats, and classic suits. I was impressed by the weighted down costume of the Ghost of Jacob Marley (Jack Evans), with its chains and weights.

Tad Janes was is outstanding as the miserly Ebenezer Scrooge and was convincing as a wealthy miser who did not want to part with his money. He looked and sounded like a scared man when he was visited by the ghosts, and when he made his complete trransformation his cheeks glowed and eyes lit up and the audience and I believed he was a new man. I enjoyed his stressful and believable confrontations with Jason Hoffman, who played Bob Cratchit with warmth and heart.

Tad also created the set design , which he kept simple with a two-story dark structure for folks to climb on. He left plenty of space for props to play key roles, including Scrooge’s desk and bed, and the Cratchits’ table among others. I loved the spooky tombstones and the special effects that accompany the cemetery scene. Thom Huenger did an excellent job with the sound. I sat in the very back and I was able to hear the effects and dialog perfectly as if I was sitting down front.

Seven year-old Rahni Huff, in her stage debut, is charming as Tiny Tim and the entire audience, especially the school children. loved it. Local veteran Sandra Murphy starred as Mrs. Fezziwig, The Ghost of Christmas Present, and Charwoman. She gives splendid performances of these characters.

By the time the show opens in The Weinberg Center for he Arts tonight – there will be added effects that were not allowed to be used at the Arts Center. Also the show I watched was missing Gene Fouche who plays the ghost of Christmas Past. Karen Stitely filled in admirably for Gene.

“A Christmas Carol” is suitable for the whole family. The production is a great showcase of MET’s talents. and a show worthy of theWeinbergCenter.

A Christmas Carol plays through December 18, 2011, at The Weinberg Center for the Arts – 20 West Patrick Street, in Frederick, Maryland. For tickets, purchase them online.