An Irish Carol at The Keegan Theatre

Sometimes you walk into a theatre and you see a great set on stage and go “WOW!!” The Keegan Theatre’s world premiere of An Irish Carol looks great. Director and Set Designer Mark A. Rhea has designed his Irish bar setting to have everything in it – including beer taps at the bar that actually dispense beer, and tables and bar stools, and above the pub a saxophone, chairs, a milk pail, a wheel barrel and a suitcase hang, among other collectibles. It’s so real you just want to order a ‘pint’ right away. 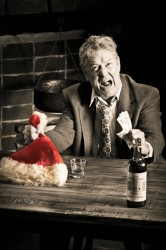 Kevin Adams as David in 'An Irish Carol.' Photo by Cameron Whitman.

Keegan Company member Matthew J. Keenan’s blarney and ‘fecked-filled’ adaptation of Dickens’ A Christmas Carol has a Scrooge-like character who is a pub owner named David, who refuses to close the bar on Christmas even though his business has been down for a long time and no one is likely to show up to his pub on Christmas Day.

Bartek, the Bob Cratchit-like young Polish bartender who had recently begun working in the pub – is told he must work on Christmas day by his ‘Bah-Hum-bugged’ boss. Bartek has a seven year-old Tiny Tim-like daughter (you guessed it – she’s ill) and wife at home, and Christmas Day is also the daughter’s birthday. Richard the friend that stole David’s true love away from him – has brought David a special letter. We, unfortunately, never hear what’s in the letter, but we do notice that after reading it – David has made an incredible transformation and a turkey or ham (it’s all wrapped in foil so I’m just guessing!).

The talented group of actors in Keegan’s production do wonders on the stage. As David, Kevin Adams does a yeoman’s job as the quite unhappy and miserable pub owner, and although his yelling and scowling gets old quickly, he does light up the stage during his transformation scene at the end of the show. Mick Tinder plays Richard – the man who stole David’s real love – with dignity. His big encounter with Adams  – when he tries to make David takes the letter Richard’s dying wife begged him to deliver to David – is a wonderful moment in this new play, and it’s played with real emotion and heart. There are funny takes by regular customers played by David Jourdan (Jim) and Frank (Timothy Lynch). Susan Marie Rhea (Anna) holds her own as the fiancée of the overly aggressive Simon (Jon Townson) whose visit to the pub is not a strictly friendly one, especially when he and David get into a loud encounter.

As Bartek – Josh Sticklin is heartwarming and extremely patient and forgiving as the kind-hearted and hard-working new bartender, who is just trying to make a living so he can take care of his wife and ill daughter. When Valerie offers to help his daughter he wraps his arms around her to show his gratitude, and it’s a lovely moment in the show.

There are some humorous moments in the show. When Dave demands an increase in price for the beer, he is asked , “When did that happen?” Dave responds, “It just happened!” There were loud laughs from the audience. When Michael – David’s younger brother announces that his wife is pregnant again – he is asked, “Is it yours?” He responds, “If it comes out drunk – it’s mine!” 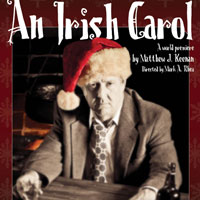 Offering a world premiere Christmas show that is recommended for children 16 or older – is a risky challenge for Keegan. Since this is the world premiere of this new work – I am interested in seeing if the playwright chooses to make any changes for future productions.

Due to adult language, An Irish Carol is recommended for ages 16 or older.