BKLYN: The Musical at Teatro101

If you too believe that once upon a time can happen and that every cloud might just have that silver lining, then TEATRO101’s presentation of BKLYN The Musical is the show to put you in the right frame of mind. Hosted at the Baltimore Theatre Project with a limited 6-night engagement this powerful, soulful musical will bring you to a standing ovation with its 8 talented singers and amazingly creative costumes. A story within a story BKLYN tells the tale of love, struggle and keeping true to one’s self. Directed by David Gregory with musical direction provided by Cedric D. Lyles, this production stirs to life feelings of hope when there is only despair through powerful musical numbers.

Trash the show is not, but the costumes are a story of a different variety. Designed by Shannon M. Maddox the costumes for the 8 actors are comprised largely of reconstituted rubbish, creating a unique but astounding series of outfits for these bedraggled ‘city-weeds.’ Maddox uses everything from Dorito bags to repurposed tablecloths in her designs, allowing for an eccentric impoverished urban sense to flow freely from these costumes. Highlights include the white dress fitted to Brooklyn (Coby Kay Callahan) made with a gray duct tape corseted bodice and white plastic bags appliquéd as flowers along the skirt and train of the dress, as well as the multi-colored tissue paper skirt created for Faith (Santina Maiolatesi) and the skirt made out of a twister mat use for Callahan’s character when she is a young child. It is incredible to see such creativity put to work in Maddox’s costumes, unlike anything I’ve ever seen before. 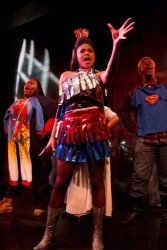 In a dynamic combination of vocal guidance and stage positioning, music director Cedric D. Lyles and production director David Gregory build a masterpiece using little more than eight talented actors, a few props and brilliant score and lyrics, composed by Mark Schoenfeld. Gregory provides excellent direction for these actors; each of them shifting easily from a city sidewalk ensemble into their character within the story, purposefully making use of the space provided to create the illusions of scene change for the audience. And Lyles work does not go unnoticed in this cast of amazing raw talent as the actors belt their songs with soulful notes and anguished expressions upon their faces. A true combination of genius at work between the two, filtered onto the actors for a stunning show.

Every musical number is supported by a compelling ensemble with beauty and clarity ringing out in their voices. Listed as ‘City Weeds’ – the voices carrying these beautiful harmonies and melodies are provided by Kelli Blackwell, Crystal Freeman, and Nick Lehan. You can hear their vocal amazement in all of the songs, but especially in the opening and closing number, entitled “Heart Behind These Hands.” Santina Maiolatesi joins the ensemble when she is not playing the mother figure of Faith. Maiolatesi has a beautiful solo filled with heartache and sorrow as she pleads the plight of her lost love in the number “Christmas Makes Me Cry.” She also appears to her daughter, Brooklyn (Coby Kay Callahan) as an angel, with a brilliant set of ‘wings’ created by the props team (David Gregory, Shannon M. Maddox, and Vanessa Buenger). Taking a busted umbrella frame, the team laces shiny tinsel and garland along with working white Christmas lights and creates glowing wings for Maiolatesi, enhancing her angelic appearance.

We hear the story unfold mostly through the narrative of each of the actors, but none so much as the Street Singer (Angelo Arrington). With a bold voice, Arrington is a musical force to be reckoned with. When he appears as the Magic Man, the words in his solo, “Magic Man” as belted with such conviction and heartfelt passion that you believe he really is the fairy godmother and with one graceful note all problems on earth could be solved. Arrington’s character is bright and constantly finding the hope, almost like a guiding beacon in a story that appears dreary.

And a more hopeful character could not be found other than Brooklyn (Coby Kay Callahan) herself as she goes from innocent child lost in the throngs of tragedy to a grown-up singing sensation striving to find her dreams in a city as cold as winter’s snow. Callahan has a forceful voice that will take your breath away. She belts her soul through music in “Once Upon a Time” letting the humbling combination of sorrow and faith pour from her lips as she sings. Callahan is quick to switch up the pace performing a feisty duo with Collins (Kevin S. McAllister) laying her accusations and beliefs bare for all to hear during the number “The Truth.”

Rivaling Brooklyn’s character as a singing diva is none other than city-spawned Paradice (Mary Searcy.) Searcy is both fiery and fierce as she storms the stage, oozing sexuality and bitchiness like a volcano during her number “Superlover.” She embodied a street-cat attitude and commits to the character with all the stereotypical gestures and vocalizations to display this bitchiness. Searcy has a touching moment where she renders a vulnerable side of the character during the number “Raven.” As versatile as she is villainous Searcy succeeds in creating the character we all love to hate, but as Paradice would say, it’s still love.

And the show-stopping, heart-wrenching scene stealing star is found in actor Kevin S. McAllister, playing the role of Taylor Collins. His commitment to his character is intense. Playing a shell-shocked PTSD street-living drunk, McAllister fits his physicality to the bill. Walking with a limp and a tremble, clutching tightly to his bottle, shaking and clutching himself when he hears the voices, all of these gestures and many more create a believable character that the audience cannot help but sympathize with. And his character is matched by his strong, harrowing voice. McAllister belts out a mournful song of anguish during “Love Was A Song” and falls humbled to his knees in a blinding moment of clarity. A masterful combination of character acting and singing provided by McAllister creates a performance of epic proportions.

So see the light at the end of the tunnel, have faith, have hope, and follow your dreams down to the Baltimore Theatre Project to see Teatro101’s production of BKLYN The Musical.