Bust at The Studio Theatre

Self-aggrandizing shtick or self-deprecating brilliance? Viewers might be divided over Bust, former Daily Show correspondent Lauren Weedman’s take on her stint volunteering at a Los Angeles women’s prison. She rolls in forty-five minutes late to her first volunteer meeting at the prison after talking a friend’s ear off on the phone about a recent night involving a guy, a bathroom and a “teeny, tiny bit of coke.” “I wanted to do something that was not about me,” she tells a room full of strangers when she finally makes it to the gathering. “I have to volunteer. I cannot not volunteer,” says the intense, deep-voiced woman who introduces herself before Lauren. Stay-at-home mom and fellow volunteer Tammy spent three years in the slammer after a “bad night in ’92.” 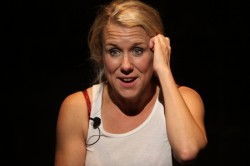 Weedman’s girl next-door glow belies her persona. Lauren will break all of the rules, several in the first volunteer meeting, as the nagging orientation leader helpfully points out – timeliness, appropriate dress (see: wife beater) and making promises (no matter how small) that cannot be kept to the inmates. In one hilarious scene, light streams onto Lauren as she promises to get one inmate out of jail and start her life over. In another, Allen Hahn’s lighting rigidly encases Lauren as she talks on the phone with an inmate behind glass. Hahn’s set is a simple flight of bright red metal stairs on wheels that Weedman manipulates to signify scene changes. When she manhandles the stairs into place, Mark Nichols creates the sound of the heaviest metal door in the world slamming shut. When Weedman crosses the stage or enters the prison, director Allison Narver has her do so in rigid, boxy patterns. We are meant to see Lauren as confined, if not similarly, along with the prisoners she awkwardly mentors. A Glamour magazine editor reworks Lauren’s piece about her darkest personal secret after reeling her in to write about it in the first place. 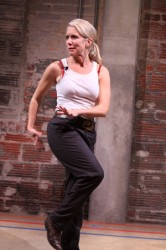 Weedman’s gift in the humor department is in the way she says something inappropriate and then tries to squirm out of the situation, only making it increasingly awkward. Her show is hilarious, but don’t mistake it for stand-up comedy. It works because of her hard-edged honesty.