Imagination Stage presents Dr. Dolittle, a musical inspired by the life and writings of Hugh Lofting, a Lieutenant in the WWl British Army who enjoyed writing fantastical animal adventures home to his son. The Book is by Mark St. Germain who co-wrote the lyrics with Randy Court – who also wrote the toe-tapping and melodious score. Janet Stanford directs this energetic and fun-filled production.

Upon walking into the auditorium, you would have no idea that you are looking down upon a stage set for a children’s musical. Scenic Designer Tom Donohue re-creates a war trench, hazily obscured by smoke, sandbags, crates, and topped with ominous coils of barbed wire. Sound designer Chris Baine adds authenticity with whistling winds and shots of cannons, and Lighting Designer Cory Ryan Frank dims the stage to add to the dreary feel. 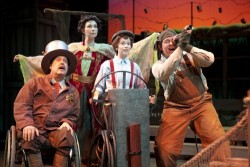 It is here that we meet Hugh Lofting, wonderfully played by Rob McQuay. Saddened by the loss of horses and other animals used for war, and frustrated by the lack of care that they are able to receive, Lofting decides to amp up his usual letters home to his son with stories about a doctor that learns to talk to animals. It is at this point that Costume Designer Debra Kim Sivigny shines, as she transforms the soldier’s plain overalls and helmets into animal traits. Sivigny cleverly does this by using battle supplies: a long, eerie gas mask becomes the face of a horse, an aviator cap becomes the floppy ears of a dog, and an upturned tin can becomes the snout of a pig, among others. An animal lover (“I like animals better than the best people”), Lofting’s animals are influenced by the people in his life; an example is when his wife, Flora, is re-imagined into a chatty, squawky parrot named Polynesia (both played by Leigh Jamesson.) Polynesia is able to teach Dr. Dolittle (also Rob McQuay) how to speak to animals in the upbeat song “The Animal A-B-C’s.”

Urged by his wife, Lofting puts his son, Colin, into his stories as Dolittle’s apprentice. However, this move sheds light on the tumultuous relationship between Lofting and his son, as the emotionally distant Dolittle and his young apprentice are often at odds. The heart of the story takes place in Africa, where Dr. Dolittle travels with Colin and a few animal friends (including an animated monkey named Jim, (Christopher Mueller) to help save the monkey population from a deadly disease. After escaping the capture of an African king (Ricardo Frederick Evans) Dolittle must persuade the lion, king of the jungle, and the rest of the animals to help out in the efforts, “This may be your jungle, but in the end, even a kind needs a friend.” Evans also plays the scoffing, boastful lion, who only agrees to help when his bossy wife (Phillip Reid) intervenes. The lions are hilarious, and Evans and Reid command the stage during their scene.

The adventures are hardly finished. After meeting a number of fantastical beasts, including a stubborn two-headed gazelle, Dolittle and his gang must work together to nurse sick animals, settle disputes, and find a way out of the clutches of an evil pirate (played by a feisty Evan Casey.) Dolittle must also find a way to realize that, while he can talk to animals, he is not that great at talking with people. Can he mend his strained relationship with his young apprentice?

Full of adventure, imagination, and heart, Dr. Dolittle is a wonderful choice for any audience member ages five and up.

Running time: 75 minutes with no intermission.