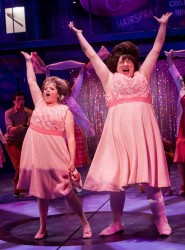 Eric Schaeffer’s brilliantly directed production (now playing in the intimate ‘in your face’ 275-seat Max  Theatre), is not just about a chubby girl dancer trying to fit in. It’s about segregation, ambition, love, family, community, dancing, and hairspray. The show has incredible dance numbers, a Tony Award-winning score by Marc Shaiman and Scott Whittman filled with ‘WOW’-inspiring songs, and a hysterical Tony Award-winning book by Thomas Meehan and Mark O’Donnell, (based on the 1988 John Waters’ film of the same name) – filled with drop-dead funny one-liners.

And what a cast! I could write a book on these incredible performance but suffice to say that everyone on the stage is sensational! Carolyn Cole is adorable as cherubic Tracy Turnblad. From her opening number “Good Morning Baltimore” until the finale, she grabs the audience in her arms and never lets go. She sings and dances up a storm. I loved her rendition of the sweet “I Can Hear the Bells,” which sets her on her journey of falling head and heels for Link Larkin (the handsome Patrick Thomas Cragin), and endears her to the audience as she chases her dream to dance on the Corny Collins Show. Cragin and Cole make a sweet couple.

National radio personality and television host Robert Aubry Davis makes a splash in his musical theater debut in this production Tracy’s mom Edna. As the overly-smothering caring and diet-obsessed Mom who knows that learning how to “remove blood from upholstery” could make her daughter wealthy – to the loving wife to Wilbur (a sweet Harry A. Winter) – Davis keeps the audience in stitches all night. And wait until you see Davis and Winter shine in their endearing duet “You’re Timeless to Me” in the second act. It will melt your heart. 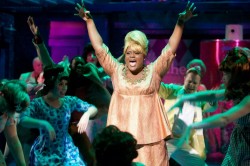 And the amazing list of performances continues with the Stubbs family. James Hayden Rodriguez is unstoppable as Seaweed. His “Run and Tell That” is breathtaking as James delivers the song’s provocative lyrics lines with equally provocative moves while never missing a beat. Adhana Reid is his spunky small sister Lil’ Inez who’s a great dancer, too. But watch out for Mama! Nova Y. Payton is spectacular as Motormouth Maybelle. She brings down the house at the end of act one with “Big, Blonde, & Beautiful,” and returns in act two with a powerful rendition of “I Know Where I’ve Been.” She brings with her powerful soulful vocals delivered with style, class, and dignity. It’s a tour de force!

Stephen Gregory Smith  (who is also the show’s Dance Captain) is perfect as suave television host Corny Collins. Sherri L. Edelen has her share of highlights as the nasty Mother-from-hell Velma Von Tussle and Erin Driscoll is equally b****y and catty as her daughter and Tracy’s rival – Amber Von Tussle. Lauren Williams is hilarious as Tracy’s gum-chewing best friend Penny Pingleton, as she transforms from a nerdish girl to self-proclaimed pretty girl who declares, “But now I’ve tasted chocolate. And I’m never going back!”

Lynn Audrey Neal is another ‘scene stealer’ of the show. She plays several small roles, including Penny’s mom, a gym teacher, and the Matron, and made the audience howl with delight. Brava!

What would Hairspray be without great dancing? Here the talented ensemble is filled with fantastic dancers, who are simply amazing. Kudos to choreographers Karma and Brianne Camp who created the best dancing in a show that I have seen this year! From the “The Nicest Kids in Town” to the finale (“You Can’t Stop the Beat”), the dancing is scintillating, and so much fun to watch. 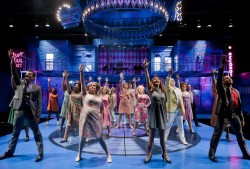 The cast of 'Hairspray.' Photo by Christopher Mueller.

Set Designer Daniel Conway has created an early 1960’s backdrop for the set. He keeps it simple and mobile and the background gets turned into a television studio, an apartment, a school and a jail. Smartly, he left ample room for the cast to dance. Kathleen Geldard’s eye-popping colorful costumes look terrific and they are very authentic to the era. The costumes also held up to the fast-paced dance moves as well. Sound Designer Matt Rowe and Lighting Designer Colin K. Bills do wonderful work. The lighting is beautiful and every word and sound is crystal clear. 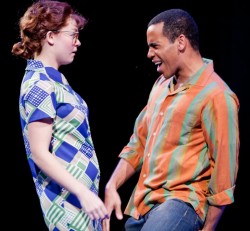 The music is provided by a nine-piece band under the musical direction of Jon Kalbfleisch, and conducted by Jenny Cartney – who also plays piano. The talented musicians are reed players Scott Van Domelen, Ed Walters, keyboardists Jonathon Tuzman, Gabriel Mangiante (who also provided the wonderful orchestrations), guitarist Gerry Kunkel, bass player Chris Chlumsky, drummer Gary Tilman, and percussionist Dave Murray. The audience had a few glimpses of the musicians who were tucked away in the set. Congrats to them for their beautiful playing and for never once drowning out the singers. It was sheer musical heaven listening to them play.

Hairspray is a dynamite musical not to be missed. It’s the show we’ve been waiting for this holiday season. This Hairspray is overflowing with talent, love and it’s performed so close to the audience that you just can’t help ‘catch that beat.’

Running time: Approximately two and half hours, with a 15 minute intermission.