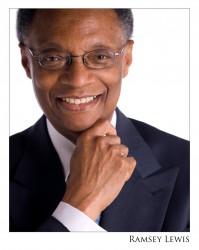 Ramsey Lewis. Photo courtesy of The Music Center at Strathmore.

It was almost 9 PM last night when Ramsey Lewis and his quintet, including Henry Johnson (guitar), Joshua Ramos (acoustic and electric bass), Charles Heath (drums), and Tim Gant (keyboards) walked on stage at the Music Center at Strathmore. It was an overly long and loud wait from the 8 PM concert start, during which Nate Foley (Artist in Residence at Strathmore) and the Midnight Sun performed. I love to see young performers be given opportunities to perform. Nate, in particular, is a very talented young guitarist with a promising future in front of him. However, the driving bass and pounding percussion of this young group proved a bit disconcerting for an audience eagerly anticipating the polished, sophisticated, and melodically driven Ramsey Lewis, a three-time Grammy Award-winning artist whose constantly evolving and versatile career has spanned more than fifty years. The crowd wanted Ramsey, and Ramsey delivered big time.

Like many great artists, Ramsey Lewis began his musical education at a young age, beginning with eleven years of classical piano study before being introduced to jazz at age fifteen. He had lots of exposure and opportunity within his church to learn and explore gospel music, and was fortunate to be mentored by a great teacher and musician who taught him the difference between notes and music, while encouraging him to listen with an inner ear and make his piano sing. He did. The result is a consummate musician as comfortable composing and performing an eight movement ballet as he is driving record sales and entertaining audiences with a string of hits that include “Wade in the Water,” “Hang on Sloopy,” and “The In Crowd.”

Ramsey’s talent is limitless, which makes his generous spirit all the more noticeable. Not only is he not threatened by sharing the spotlight with each and every member of his amazing group, he clearly delights in giving them frequent and extended opportunities to showcase their individual talents. While he has been working with his trio for many years, he just recently started working with his quintet, a group that simply oozes talent and personality. 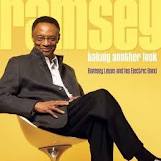 Joshua Ramos brings a wonderful diversity of musical texture and mood to the group, performing on both upright acoustic and electric bass, and he is fun to watch as he keeps his ears open and his eyes glued to the keyboard when Ramsey takes off on his improvisational escapades at the piano. Henry Johnson’s fingers fly over the strings of his guitar, and his joy in being a part of the musical experience that is Ramsey is more than contagious. Charles Heath is perfect on percussion, and his versatility of sound and style is refreshingly musical, as well as a lesson to aspiring drummers that anybody with basic rhythmic ability can play the role of a human metronome, but a musician makes music. With Ramsey on piano, one might wonder what would be left for Tim Gant to do on keyboards, but he does plenty, and he does it well. Ramsey is lucky to be working with this group, and the group is lucky to be working with Ramsey.

Ramsey is a seasoned performer, and he knows how to pace a show. His decision to open with a huge arrangement of “Wade in the Water,” was brilliant, and he enjoyed the moment, commenting that he decided to kick things off with an encore piece. Throughout the evening, he mixed things up in a way that kept his audience not knowing what wonderful musical surprise would come next. One minute the group was performing a wildly complex and Latin influenced piece called “Brazillica,” or his 1974 percussive hit “Tambura,” and at the next Ramsey would take off on a nostalgic cover of “Betcha By Golly Wow!” or Paul McCartney’s “Here, There, and Everywhere.”
With a nod to Christmas, Ramsey treated a very appreciative audience to a jazz ballad interpretation of “Santa Claus is Coming to Town.” Nothing could have made his audience happier, short of Ramsey announcing that he had decided to settle in for a long winter’s night during which his beautiful music would never stop at all.

Merry Christmas, Ramsey. You are a gift to the world.

I’ve said it before, and I’ll say it again. If you are in the market for a holiday gift for someone special, look no further than the ticket office at Strathmore. There’s nothing better than a live performance, especially at Strathmore.

The Music Center at Strathmore
Click here to purchase tickets online or call (301) 581-5100.
Events and Calendar

Watch and listen to Ramsey Lewis and his Electric Band play “Living for the City.”

Watch and listen to Ramsey Lewis and his quartet play “You Are the Reason.”