Pumpkin Theatre’s second show of the season is Rapunzel, the classic fairy tale of the abundant- haired heroine. They offer a lighthearted musical adaptation by David Crane and Marta Kauffman. True to Pumpkin’s style, the show is energetic, colorful, and upbeat, just right for the young audiences they cater to. The story is told through dialogue sprinkled with some melodic and comedic songs that aid in moving the story along and holding children’s attention. 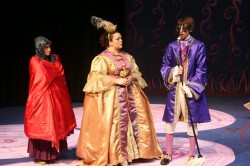 The production stays true to the classic version and opens with a starving couple who covets and eventually steals the plentiful harvest of their neighbor’s garden, who turns out to be a witch.They pay for the crime by handing over their first born child, the title character. We fast forward to Rapunzel’s sixteenth birthday upon which her mother goes back on a promise to allow her to leave the tower in which she has been confined.The two deliver a comical duet to negotiate Rapunzel’s freedom. Rapunzel is played by Elisa Dugan whose sweet and expressive performance is a delight. She portrays Rapunzel as an adventurous soul who is torn between pleasing her mother and finding her life. The witch is played by Michele Jenkins Guyton, with just enough evil nuance to be convincing, yet she shows a soft side, appropriate in this version, as  the witch comes to love and care for Rapunzel, never revealing the sordid history of Rapunzel’s birth. Her attempt to keep her in the tower is played as over-protectiveness, rather than cruelty. 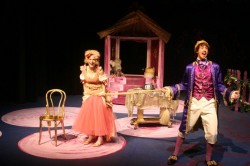 Rapunzel’s rescuer, Prince Brian, is thrilled to stumble upon the damsel in distress, as he is longing to be someone’s hero and find his own identity in the royal family. Michael Perrie, Jr. is fantastic, adding dimension to the role with great physical comedy. He is an audience favorite, eliciting giggles from the little ones with silly antics. Paired with Rapunzel, the duo shines. They have a sweet and convincing chemistry as they pair up and challenge their overbearing parents.The friendship the two develop throughout the plot is a highlight of this adaptation. It is a welcome departure from the standard formulaic love story and adds a wonderful message about falling in love with your best friend.

The story is vivaciously narrated by Stacey Needle and Holly Gibbs. Both make various other appearances, using accents and costumes to change their identities. Gibbs is highly enjoyable and as the queen. Rounding out the cast is Greg Guyton as Prince Brian’s valet, Simon. Guyton is endearing as the ever faithful servant, who even romances the witch to buy Brian time with Rapunzel. Both Simon and the witch show off impressive vocal abilities, as he serenades her with an amusing and sarcastic song declaring her “attributes.” The witch discovers the secret plot, but somehow, everyone ends up living happily ever after. 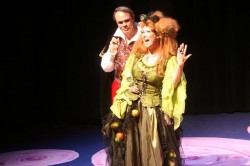 The simple and straightforward set (designed by Ryan Michael Haase) looks as though a team of little girls have dreamt it up, with its lovely floral and pink swirl motif. Minimal set changes are made, with the action centering on the legendary tower.

This production of Rapunzel is engaging and fun, yet another success story for the always enchanting, Pumpkin Theatre.