If you’re looking for a gut-busting good time, a night filled with laughter and wit, you need look no further than the Washington Improv Theater and their production of Seasonal Disorder. A series of long-form improve shows, Seasonal Disorder provides audiences with laugh-after-laugh from creative unscripted moments that seem to explode onto the stage from nothing more than the talented imaginative minds of the players. 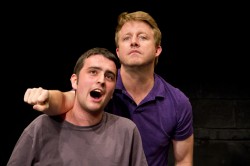 Washington Improv Theater (better known as WIT) specializes in the performance of long-form improv, which emphasizes the development of on-going narrative and character relationships. Lead by Artistic and Executive director, Mark Chalfant (who also appeared in the secondary segment iMusical) the company provides outstanding performances of some of the funniest stuff in town. And it’s all done without a script, without rehearsals, and with a little help of audience suggestions.

With an improv show every audience sees something different, even with the same concept or basic framework for the performance you will never get the same production twice. Seasonal Disorder showcases a plethora of DC area improv performers as well as those housed with WIT. For tonight’s show the audience was treated to Armando: Home for the Holidays and iMusical & Friends.

Armando: Home for the Holidays was a group of area players featuring: Tom Achilles, Sara Armour, Bill DiPiero, Cassidy Russell, Murphy McHugh, Joe Uchno, Cara Hayes, Laura Spadanuta, David Sewell, Joe Donnelly, Curtis Raye, Ben Williams, and Kevin Gauthier. This troupe of performers worked with an incredible sense of unity and cohesive flow, creating laughable scenes for the audience to enjoy. The players were consistently accepting offers presented to them, which in improv is a key element of scene progression and overall good performing. They also provided great sound effects to enhance the scenes as they played out. And the physical expressions were priceless. Some scenes required players to be off to the side silently acting out actions, which were hysterical and scene stealing as the performers contorted their faces into over exaggerated expressions to convey their point. An overall hilarious presentation of happenstance at its finest. 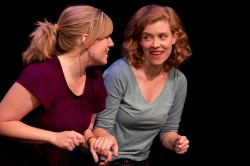 iMusical & Friends was in a similar vein of hilarity only with the added bonus of being a musical. Completely unscripted and created before the audience’s very eyes a musical was performed. Featuring: Matt Berman, Mark Chalfant, Sarah Donnelly, Karen Lange, Justin Purvis, Curtis Raye, Greer Smith, Josh Waytz, Catherine Deadman, and Stephanie Anderson with Travis Ploeger on accompaniment. It was brilliant to watch the players work together to create a musical, so seemingly real with rhyming songs and flowing dialogue that you’d almost never know you were in an improve show. Filled to the brim with hysterical moments the performers slipped and slid all around bouncing from one character to another, again accepting offers as they were presented while still managing to captivate the audience. It was sheer improvisational genius to behold.