The renowned The Second City comedy troupe – that launched the careers of some of the biggest names in comedy: John Belushi, Dan Akroyd and Gilda Radner – returns to Woolly Mammoth Theatre Company with their spot-on brand of comedy Spoiler Alert: Everybody Dies. 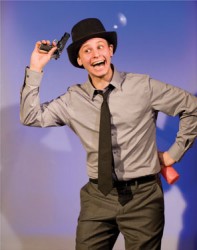 Their current show boasts a group of 6 very talented performers. 4 from Chicago: James T. Alfred, Maribeth Monroe, Scott Montgomery and Travis Turner, Aaron Bliden, who is from DC, and the very funny Jessica Frances Duke, who is a Woolly company member.

Some favorite sketches include one with a smarmy TSA agent (Scott Montgomery) who takes his job a bit too far, an over-the-top preacher played very energetically by Travis Turner. and two brothers (Aaron Bliden and Scott Montgomery) doing a commercial for their furniture store. As is all the sketches in the production – the timing is impeccable even when they must deliver some real groaner puns.

President Obama and Kobe Bryant are depicted in the evening’s proceedings by James T. Alfred and Travis Turner. You have to see the show to see how they fit in. My editor does not like us ‘giving it all away.’

Maribeth Monroe and Jessica Francis Dukes are the scene-stealers of the production. They play all the female roles, including a teacher who is trying to keep her private life away from a very inquisitive student.

Director Billy Bungeroth does a fine job getting great performances out of his talented cast. The evening moved along at a fast pace, and I was sorry to see it end.

Matthew Loren Cohen provides musical accompaniment as well as the soundscape for the evening. It takes three keyboards and a laptop running QLab to pull it all off and Cohen does so with great ease.

Set and Lighting Designer Colin K. Bills keeps the production design simple but functional. There is one big screen-like structure that he lights from behind to change color.

If you have had your fill of the usual holiday fare and “God Bless Us Every One,” head over  to Woolly Mammoth for some great laughs and a stellar bunch of performers.

Running Time: Two hours and fifteen minutes, including one intermission.