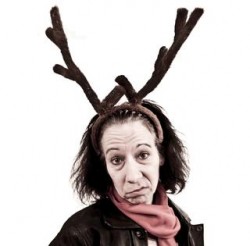 There is a scandal at the North Pole involving the mistreatment of elves, violated reindeers and Santa Claus. This play is not politically correct and uses humor to place serious issues center stage.

The set created by Tad Janes is a festive holiday scene with a bar in the back of stage right. A chair is put out in front of the audience, with scattered presents and decorations. It’s a simple effective stage with plenty of room for the story to unfold.

The show marks Tim Seltzer’s directing debut at the Maryland Ensemble Theatre. Tim gets inspired performance from his cast who are subjected to a lot of drinking, smoking, cursing, and lotsof talk about sexual situations. This isn’t a show to bring young kids to.

Larry Fellows plays the alpha male reindeer part of Dasher down. He sure has those reindeers in line and running like they were recruits in basic training. Justin Johnson plays the gay reindeer Cupid. Justin is a riot and had the audience laughing out loud. The intimate stage can not contain Mr. Johnson, and if you are a cute guy sitting in the first row – beware because you may have a visitor sitting in your lap! 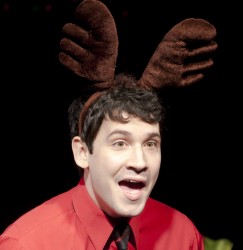 Eric Jones is a powerful Donner. His yearning for a better life for his son is heart-wrenching, and his ‘looking the other way’ waiting for things to ‘get better’ and knowing abuse is happening- makes you want to strangle him.

Comet (Lia Seltzer) the Santa supporter – is a troubled youth reindeer who is rescued by Mr. Claus. Comet may have been rescued by Santa, could use some rehab for her Jack Daniels chugging. Her performance is riveting. Caitlyn Joy turns in a solid performance as Dancer. Courtney McLaughlin, who accuses Santa of some inappropriate behavior, offers an emotional performance, and Matt Lee is splendid and hysterical as Hollywood. Some of his far-fetched dreams drew a lot of laughter from the audience.

But the real scene stealer of the show is Julie Herber who plays Vixen. Did Santa cross the line? Did she lead Santa on with her little red dress and boots? Do we believe her emotional, strong case? Come see the play and draw your own conclusions to what really happened in Santa’s toy shop.

The Eight: Reindeer Monologues is thought provoking theatre, which will make you think, laugh, and shake your head in disbelief.