The Rough-Faced Girl, Synetic Theater’s current Family Theater production, is much like Synetic Theater’s shows for adults: visually compelling, captivating, tender, and thoroughly worthwhile. The story itself is beautiful. A young Native American girl, whose mother died at her birth, is raised by a resentful and overburdened older sister. As she approaches adulthood, the young girl is burned in a fire and left with disfiguring scars, thus coming to be known as ‘The Rough-Faced Girl.’ 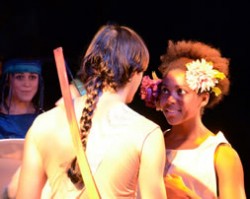 The other young women in the community, the Rough-Faced Girl’s sister, Takhi, included, doggedly pursue a handsome young man, Achak, in hopes of winning his love. They are so relentless that his sister, a shaman, makes him invisible to all but those pure of heart. The Rough-Faced Girl sees him, but to claim him as hers she must overcome the scorn of others and her own shame about her scars. With help from her mother’s spirit and encouragement from the spirits of the woods – she sets out for his house, where she is welcomed by his sister, washed clean by spirits of the water, and embraced by Achak.

I attended with my five-year-old and was thrilled to be able to expose her to a story in which the girl with the purest heart wins, not the girl with the adequately sized-foot and the busy fairy godmother. I was also pleased to expose her to quality, variety, and power of the dance, which, along with mime, is the means the actors use to tell the story. Parents explained the plot beforehand and whispered updates as the need arose. None of what was occurring on stage was lost on any of the children, as is the case in plays that use dialogue — always, there are words here and there that some child in the audience doesn’t understand. All the children in the audience of The Rough-Faced Girl paid rapt attention, even a two-year-old.

Parts of the play are quite funny. Randy Snight, who plays one of the women pursing Achak, as well as the part of several spirits, drew appreciative laughter as his flipped his braids and wiggled his rear. At one point in the chase, Achak and the young women dash into the audience, delighting the youngsters. Other parts of the play, such as the scene between The Rough-Faced Girl and her mother’s spirit, are deeply moving. Phil Charlwood’s set is beautifully designed and includes long curtains that are integral to the story telling. Characters hide, disappear, or, in spirit form, descend, artfully winding their feet into the cloth and flipping over acrobatically. 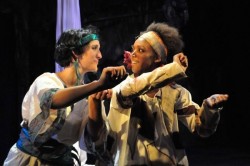 The quality of the production on all fronts is surprising and thrilling.  Jade Wheeler, as The Rough-Faced Girl, is skillful and captivating, but no member of this five-person cast is any less so. Jessica Thorne, as Taki, Joshua Rosenblum, as Achak, and Tori Bertocci, as Nadie, the Shaman sister of Achek, pour themselves into their roles.  Because they are skilled at mime, wonderful dancers, and expressive and energetic actors, the cast manages to communicate a fairly complicated story to a young audience very successfully.

This play affords a rare and valuable opportunity to show children how dance and movement can be used to tell a story and the different forms plays can take, as well as impart a solid message about the importance of inner, not outer, beauty.