For nearly 30 years, the Washington Revels have been putting on Christmas productions as well as other entertainment offerings throughout the calendar year.  Each year, the Christmas production has a different theme with this year’s theme being Andalusia, Spain. Under the artistic/music direction of Roberta Gasbarre and Elizabeth Fulford Miller, Traditional Jewish, Arabic, and Spanish music, dance, and drama are presented by a large cast of professional and non-professional singers and actors ranging from children to adults.

I was certainly interested in seeing this production as I have extremely fond memories of my time in Andalucia as a college student studying abroad.  There’s no other place on Earth that quite gets me as excited as the South of Spain – the culture, the food, the history, the traditions, the ambience, and the language.

Although I wasn’t treated to a masterful and in-depth interpretation of Andalucian culture and holiday traditions by uniformly expert actors and musicians, I was treated to a very family-friendly holiday production that, at the very least, introduces the young and old to traditional music in this diverse pocket of our globe. In true Revels fashion, the cast and the audience alike join in to recreate moments from the past- from stories, to songs, to dances.  That is, in itself, is a delight.

While some of these stories presented work better than others, they, at the core, provide a little something for everyone. The stories about Joha (an endearing Danny Pushkin), a well-known and beloved “fool” in the Sephardic and Arab diaspora communities are certain to charm the young and the young at heart. Graham Pilato’s Don Juan, the iconic Spanish character, is also appropriately charming and romantic and is likely to resonate with many in the audience. Collectively, their stories are heavily influenced by the melding of Sephardic, Arabic/Moorish, and European cultures in Andalucia, which is one reason why they are so interesting and compelling. Among the standouts is The Mummer’s Play in Act II. 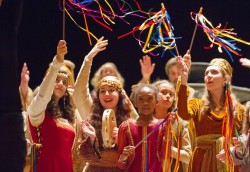 Merrily waving their ribbons. Photo by by Nick Eckert.

The songs are diverse lot of traditional music. Because there are so many cultural influences in this region of Spain, it was a good decision to include a variety of styles and sounds. Composition-wise, “Ay Luna que Reluces”(“Oh Shining Moon”) is a definite standout as is the baylado (dance song) “Pues que tanto bien tenemos” (“Because we do it so well”).  Singing-wise, the execution of all of the songs ranges from exceptional to average. It’s clear the group has a standout singer in Susan Gaeta, who leads more than her share of songs during the evening, as well as Greg Lewis (Executive Director of the Washington Revels).  The choral presentations of the songs are much stronger in Act II than in Act I (at least at the performance I attended). In many cases, the harmonies are clear though at other times they are muddled.  Nonetheless, the group should be commended for attempting the, at times, difficult music. Likewise, they handle the foreign language requirements admirably, but in future productions, they would likely benefit from a dialect coach to ensure authenticity in the pronunciations of some of the Spanish sounds in particular.  Although many are pronounced correctly, the cast fails to capture the unique way some of the words are pronounced in southern Spain (‘pescado’ comes to mind).

Two of the highlights of the show come in the form of the dances. In Act I, several young girls dance the familiar sevillanas, a folk dance that is now considered a form of flamenco. Having spent several days at Fería in Seville during my college days, watching the dances in this production brought me back to the great time I had during that annual celebration. The young cast does a respectable job in presenting them under the tutelage of Dance Captain Diane Behrens Winslow. In Act II, the men get their turn at dance and are equally as successful as the women. Their Saidi dance originated in Europe and the men perform it with great vigor and presence.

Accompanying the singers/dancers is a huge cast of musicians. While a brass ensemble opens and closes the show with great enthusiasm, the playing (at least at the performance I attended) is not always very precise. The musical stylings of Trio Sefardi and Layali El Andalus are much more compelling and interesting. Their expertise on their traditional Spanish instruments is evident. A selection of violins add to the audience’s musical enjoyment and certainly round out the sound.

While one of the fun features of any Revels production is audience participation, this particular production did so in such a way that, at times, detracts from the overall experience of watching the presentation. Before Act II begins, Greg Lewis instructs the audience on the various songs we would sing with the cast in Act II.  This is understandable because it cannot be assumed that all audience members were familiar with the songs. However, the “practicing” took me out of the moment of watching the show. Perhaps there is a happy medium to find between “teaching” and allowing the audience to take in the production as a whole.

Though the structure of the evening left me with some misgivings, I do have to whole heartedly commend the Revels for putting on an ambitious production. The energy and excitement of the cast is evident and the production values certainly add to the enjoyment of the evening. Colin K. Bills’ set and lighting design transports the audience to Andalucia during the holiday season with all of the rich red hues.  His choice to incorporate lanterns in the beginning of Act II allows a beautiful picture to be created on stage. Ingrid Crepau’s design of the Tarasque puppet is stunning and realistic. It is only used for several moments in the production, but they are memorable ones.

Overall, I would recommend this show. It allows families to experience the holidays in a slightly different way, and it’s a feast for the eyes and the ears.