Riverside Center Dinner Theater presents Irving Berlin’s White Christmas. Based on the classic 1954 film, Jason J. Michael directs this charming musical that harkens back to a simpler time, and highlights the true values of Christmas.

Scenic Designer David P. Stock sure had his work cut out with this one, as there were multiple set changes, each one as detailed as the last. From a WWII bunker, the set of The Ed Sullivan Show, a busy train, and a ramshackle barn (among others), this production takes the audience all over the place. Even though there are a number of them, the set changes are continually swift, professional, and well executed. Lighting Designer Phil Carlucci focuses spotlights on the characters, while their shadows beautifully dance along in the background as the stage changes colors, and musical direction by Rollin E. Wehman ensures that all of the musical numbers are on-point. Costume Designers Gaya Law and Nancy M. Furey bring back the optimistic post WWII era with fanciful suits, pleated skirts, and elbow-length white gloves. 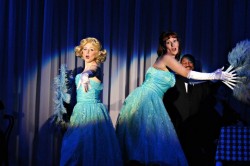 It’s Christmas Eve, and Privates Bob Wallace (Jeffrey Shankle) and Phil Davis (Dennis Clark) are entertaining their fellow men with a Christmas musical number. Hovering between interest and the demands of his authoritative role, General Henry Waverly (Robert L. Nelson) cuts their show short. After the war, Wallace and Davis become a successful song-and-dance team, and develop romantic ties with sister-act Betty Haynes (Mary Payne) and Judy Haynes (Mary Anne Furey). Together, they travel to Vermont, where General Waverly has opened an inn that is struggling to stay running. However, if the foursome can manage to put on a Broadway show in the inn’s barn (with just five days time!) they just may have a chance of drawing a profitable audience to their beloved former commanding officer’s failing business. Plagued by misunderstandings, jealousy, turn-of-events, and overall chaos, this group must dig deep to find the strength they need to pull off a Christmas miracle!

Shankle, Clark, Payne and Furey are fabulous singers and dance up a storm. Nelson brings great dignity to his role and his address to the troops at the end of the show tugged at my heart.

One major highlight of the show is the choreography by Dennis J. Clark. The dancers are decked out in matching white suits and hats for the memorable number “Blue Skies,” and the ensemble gets to show off their tap dancing talents in the upbeat number, “I Love a Piano.” Swing dancing also livens up the show and is great fun to watch. 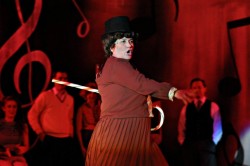 The powerhouse Andrea Kahane as Martha Watson, the innkeeper who remembers her love for the stage, and young Annalese Fusaro, General Waverly’s assertive granddaughter Susan, both steal the show with their showstopping renditions of “Let Me Sing, and I’m Happy.” I especially loved the closing number, when “snowfall” flutters from overhead and the ensemble sings “White Christmas.”

The sense of community strength and people coming together to create something remarkable is a big Christmas ideal, and this production displays that value in spades. With old fashioned, family-friendly entertainment, White Christmas proves to be a worthy Christmas outing.

Running time: Approximately Two hours and 45 minutes, including one intermission.