‘A Quick 5’ With Colin K Bills 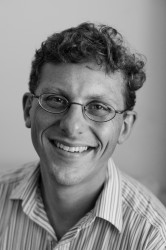 Colin K. Bills has been lighting up DC stages with his innovative designs since 2001. Some recent credits include Hairspray and Side By Side By Sondheim at Signature Theatre, Romeo and Juliet and Othello for Synetic Theater, A Bright New Boise and Bootycandy at Woolly Mammoth Theatre Company, Pop! and Lungs at The Studio Theatre and New Kid and Junebug and the Reverend at Imagination Stage. He is a three-time Helen Hayes Award winner. Lighting Design is an art form that is very under-appreciated and adds so much to your theatre experience. It creates mood and sometimes even a location. Next time you go to a show – take note of the Lighting Designer’s work.

When did you first become interested in theatrical lighting design? 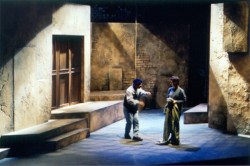 My interest in theater started really early – but I never thought I’d be a designer. In third grade, I joined my church’s children’s choir, and I was totally hooked on performing. I was in musicals, comedy troupes, madrigal choirs, show choir, you name it, through high school and into college. Despite it being a major part of my life, I never once thought of it as a career path. And in college, I realized that what really got me excited was not so much the performing, but the creation, the process.  At the same time, I was a total math and science geek, I love pure physics, but I was bored to tears by my engineering classes, and especially by the engineers themselves – there just wasn’t enough “mad scientist” in my math and science classes, and certainly not enough awe at how beautiful physics can be. So I was kind of in this perfect storm of loving artistic processes, and totally frustrated with my science background not allowing for a true creative outlet, and I was just casting nets – I looked at architecture, linguistics, environmental studies – anything that kind of combined science with creative thought and problem solving. Around this time one of my best friends needed help hanging lights for a show, and one thing led to another. I took a lighting design class, and it was like “ohmigod, light is EVERYWHERE!”  and it kind of blew my mind, that something so basic – light – could be controlled in this way, and I was hooked.

What was your first lighting design in the DC area? 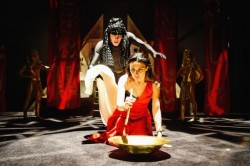 Well, there were a bunch of shows for which I provided lighting early on in my DC career, but even at the time, I’m not sure I would have called it “design”. The first show for which I was hired where I really got to bust out and design was with the Stanislavski Theater Studio – which later morphed into what is now Synetic.  The show was Don Quixote, at the Church Street Theater in early 2001. In fact, STS and Synetic gave me most of my (paid) design work in those first few years that I was in DC.

What is the toughest venue you have had to light? 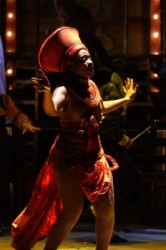 When Studio was expanding in 2002/2003, they staged a production of Bat Boy in the abandoned showroom next door which was to eventually become the Metheny Theater. I remember having a meeting, where Serge showed me the space, and he said, “we’re not really sure how you’re going to actually plug anything in, because there’s not really any electricity.” So I remember thinking at the time, “this might be difficult.”  We eventually got some appropriate power (and installed some hanging positions), so in the end, it wasn’t too bad. Likewise, when Woolly staged Full Circle in 2009, the action took place over the entire building. I really grappled with making the architectural environment that is the Woolly lobby into a theatrical space, while still maintaining its architectural nature. I don’t know that it was really the space itself that was tough, but I imposed this idea on myself that I didn’t want it to feel too “theatrical,” I wanted to maintain it as architectural space that was activated by the play, and that meant thinking about the lighting less as theater lighting than really well placed architectural lighting. So no space is really that tough, unless you try to impose proscenium conventions on it when that isn’t really appropriate.

Do most directors have an idea about how the lighting should look when you first meet with them? 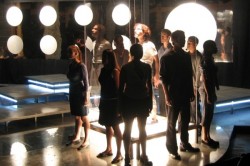 ‘The Who’s Tommy’ lighting at The Studio Theatre. Photo by Giorgos Tsappas.

Rarely.  It’s so much more important to talk about the mood, and the style, and the big ideas in the play and all these other ethereal elements that inform the equally ethereal art of lighting. Most directors know this, and so steer the conversation in this way. Every once in awhile, a director will have a picture to bring to the first meeting that might have a specific lighting idea as part of it, but even then, the expectation isn’t so much about recreating that picture as recreating the mood of the picture. And sometimes, we’ll talk early on about theatrical lighting conventions, like the use of a followspot or sharp specials as storytelling elements, but that’s usually a little bit into the process.

I’m in Portland right now, at Portland Center Stage, working on a new play called The North Plan, a comedy about an unlikely alliance between a ditzy Ozark woman and a State Dept. worker in a jail in Lodus, MO, soon after the US government is dissolved and the shadow government has taken over. Then, Really Really at Signature Theatre, and Civilization (All You Can Eat) at Woolly Mammoth Theatre Company.

Watch Joel Markowitz’s interview with Colin Bills at the 2011 Helen Hayes Ovationn Gala. The video was filmed by Mark Beachy. The interview begins at 2:25.