‘A Quick 5’ With Euan Morton 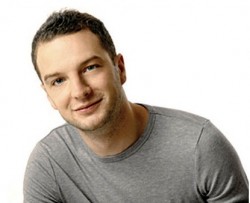 Euan Morton is currently performing the role of Launce in The Two Gentleman of Verona at Shakespeare Theatre Company. You saw Euan at Ford’s Theatre as Leo Frank in Parade and Anatoly in Chess at Signature Theatre where he also performed his solo cabaret act. NY theatre credits include Sondheim on Sondheim with Barbara Cook, Norm Lewis and Leslie Kritzer and Howard Katz with Alfred Molina at Roundabout Theatre Company, and Taboo – where he gave an amazing portrayal of pop singer Boy George, a role that brought him a Tony Award nomination. I am pleased to call Euan a friend, and I am grateful he was able to do this column in the middle of a very intense rehearsal schedule for The Two Gentleman of Verona.

I moved to London just after my 17th birthday and began studying at Mountview Theatre School in North London. I originally went to study musical theatre but realized quickly that I would be better served studying classical acting and so transferred from the musical course to the acting course after my first year. Even now, after 14 years removed from college, I still miss those days. I miss my friends back in London.

You portrayed Boy George in Taboo on the London stage and on Broadway. What do you think the reasons were for the undeserved short Broadway run? 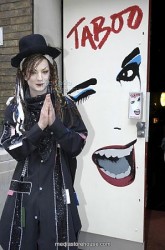 I think perhaps Taboo was too ‘of its own place’. Like Rent was a little too American for London (though more successful) Also Taboo was risky at a time when risk taking was not as normal on Broadway as it is today. I am proud that perhaps Rosie and her love for Taboo helped open the doors for other, close to the bone, works to be produced on the Great White Way.

You recently moved to the DC area from NYC. What made you relocate here permanently?

Well actually it isn’t permanent, though I love DC very much and have been well received here. It just so happened that after I finished Sondheim on Sondheim on Broadway in the summer of 2010 the next two long term jobs I had lined up were in DC. Then after a little break (where I toured the US with my new album, Caledonia) I returned to DC to take part in The Two Gentlemen of Verona at the Shakespeare Theatre Company. We are currently in our run now and after we finish in March I go back on the road again to keep selling the album and singing the concerts I love to do. Then I’ll spend some time in LA and make a permanent move back to NYC in the Fall of 2012. I will always have a connection to Washington (or more precisely Arlington, VA) as I have a home here and don’t plan on selling any time soon!!

Barbara Cook was recently awarded a Kennedy Center Honor. What was the experience like of sharing the stage with her in Sondheim on Sondheim? 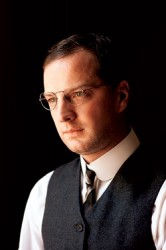 She is a gem. A true theatrical icon. And I am proud to say that we have become good friends since our Sondheim days. In fact, Barbara asked me to join her for a night of music and mirth at Feinstein’s in New York just before Christmas and of course I jumped at the chance. It was wonderful to share such an intimate musical environment with her and to learn from an American musical star. She presents such honesty and vulnerability when she sings and if I can achieve half as much truth in song when I sing then I will feel like I’ve ‘made it’. AND she has taught me all the saucy jokes I know!!

What’s next for you after The Two Gentleman of Verona at Shakespeare Theatre Company? 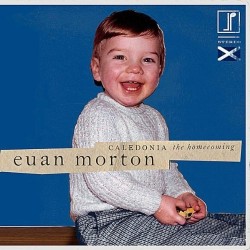 Another musical tour for my Caledonia album. I start in Georgia, then onto Alabama and New Orleans. Then across Texas and New Mexico and the tour culminates in Los Angeles. Travelling America by car is my most very favourite thing and getting paid to sing along the way is a huge bonus! I’m planning a very Grapes of Wrath tour, except without the poverty and hardship. I hope. I love that sense of true freedom one gets from hitting the road in the Ford Focus station wagon! Of course, I’m still a slave to the oil barons and toll booth keepers but I FEEL free and it’s the illusion of freedom that has kept me going for so long and I refuse to give up hope just yet.

Listen to Euan Morton sing “I Will Always Love You.”