‘A Quick 5’ With Michael Schweikardt 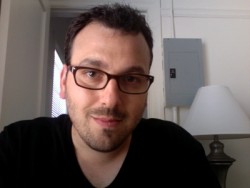 Michael Schweikardt is a very talented Scenic and Costume Designer. You have seen his work at Arena Stage where he designed Ella a few years back. He has designed for some of the top regional theatres in the country. Recent credits include Show Boat for Goodspeed Musicals, Whisper House at Old Globe, Deathtrap for Asolo Rep and The Subject Was Roses for George Street Playhouse. Opera credits include The Consul for Opera New Jersey and A Month in The Country for Manhattan School of Music. His next project is Around The World in 80 Days for Pittsburgh Public Theatre. I’ve known Michael for many years and I am very happy for all of his success.

Where did you go to school and whom did you study under?

I received my BFA from Mason Gross School Of The Arts at Rutgers University in 1993.  I studied set design under John Jensen and Michael Miller.  I studied costume design under David Murin and Vickie Esposito.  The rest of my education was done ‘on the job’.

What was your first professional design job?

What was the biggest challenge in designing  Show Boat for the tiny stage at Goodspeed Opera House in East Haddam Connecticut? 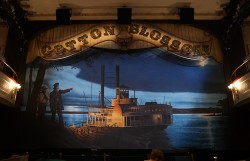 Of course, fitting the Cotton Blossom on that stage was a challenge. However it wasn’t the biggest challenge I was facing in the design. I had to think beyond the boat. In Act Two of Showboat we travel with Magnolia to turn of the century Chicago and spend a great deal of time there, including two pivotal scenes at The Trocadero Club. It was important to me that the sets for this section of the show be as fully realized and as satisfying as the Act One boat. There was a lot of discussion about the possibility of re-dressing the boat in some way to become The Trocadero Club but I was adamant that the audience would not be fooled by that solution.  I wanted to take them on a complete journey away from the Cotton Blossom to the big city and then back again. Achieving that was the real feat of the design.

The musical Ella is based on the life of Ella Fitzgerald and has been touring for the past few years. The tour is set up in such a way so that each theatre it plays produces it as a separate production. How many productions of Ella have you designed, and do you go to each of the venues the show plays in? 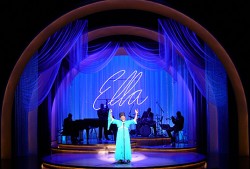 I believe the last time I added up the productions it came to a total of 25! It is a show that is near and dear to my heart. The cast (Tina Fabrique as Ella!) and the production team became like family. Maintaining the quality and the consistency of the production was important to me so I designed and oversaw every production and personally attended almost every venue. Every single theater that has produced that show has mounted a sterling production. It really should play Broadway. New York City is missing out! 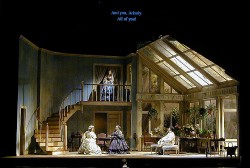 Scenic Design for 'A Month in the Country.'

For me, the design process is exactly the same. I start by ask myself, “What is the story and how do I tell it clearly?” I consider myself a storyteller so I come to every project, be it a play or a musical or an opera, from that point of view. I don’t differentiate. I serve the text. Often opera (and revivals of musicals and plays as well) come with audience expectations attached.  It’s the inevitable result of years of history of production. We think we know ‘how a piece is supposed to be done’.  However it’s important to read any piece of theater as if you are encountering it for the very first time, as if it’s just been written and never been produced, as if it’s just you and the authors intention. That’s the job.

Watch a trailer video for Ella.

Watch a video of A Month in the Country.