‘A Quick 5’ With Rick Foucheux 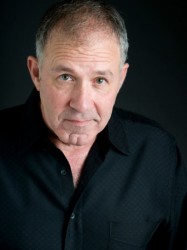 Rick Foucheux is one of DC’s most respected and honored actors. He  just completed appearing as Mr. Bennet in Pride and Prejudice at Round House Theatre. Over the years, Rick’s work has been seen at Theater J, Olney Theatre Center, Woolly Mammoth Theatre Company, Ford’s Theatre, Arena Stage and recently GWU, among others. Some of his triumphs include Reb Saunders in The Chosen at Theater J at Arena Stage, Tevye in Fiddler On The Roof at Olney Theatre Center, Shylock in The Merchant of Venice at GWU, Stephen Douglas in The Rivalry at Ford’s Theatre, Oscar Madison in The Odd Couple at Theater J, and Willy Loman in Death of a Salesman at Arena Stage.

What was your first performing job in the DC area?

To answer quite technically, it was as a talk-show host on WJLA-TV. That’s what brought me to DC. It was in 1982, but after a year I made a career shift to the theatre. The next fall, 1983, I played a robot in R.U.R. at Woolly Mammoth.

What did you do to prepare to play Reb Saunders  – a very devout Orthodox Jew in The Chosen? 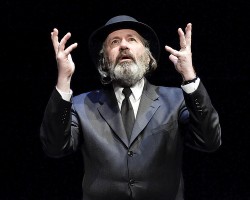 Rick Foucheux as Reb Saunders in ‘The Chosen’ at Theater J at Arena Stage. Photo by Stan Barouh.

Aaron Posner, the writer-adapter and director of this show was extremely helpful in pointing me to the right background material. Ari Roth and the dramaturgical team at Theater J have always been loving stewards in my Judaic training because of the many roles I’ve done there. I watched films, listened to tapes, and attended services. My dialect coach, Shelley Gillon, was also incredibly helpful.

You have played a very wide range of characters in your career, everything from Willy Loman to Oscar Madison to Tevye. Which are your favorite kinds of roles to play, or are they all equally as satisfying?

You’re right: I have been very lucky, and I’ve found something to like about them all. I must say that once an energetic comedy has been thoroughly prepared and a good cast has had some time to season in it, there’s nothing as good or as fun as making people laugh. I’d easily do a long rep of  Odd Couple and Fiddler.  I could probably retire on that!

Rick Foucheux (far right) as Shylock in ‘The Merchant of Venice’ at George Washington University. Photo by Francis Rivera.

You recently played Shylock in The Merchant of Venice at George Washington University. What was it like working with actors who are thinking of doing this as a career, and did any of them ask advice from you?

My castmates and students on this show provided me with a much-needed shot in the arm for a few reasons. Yes, they were full of questions about the art of acting and about the business. But they also were naturally infused with that special youthful concoction that makes every day a whole new negotiation of life. They reawakened my love of the unknown and the daring. It was one of the most rewarding experiences I’ve had in the theatre. I hope to do it again. 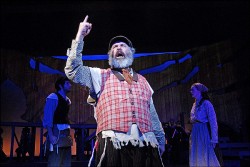 What do you like most about working in the DC Theatre community?

I love the community of artists here – not just actors, but directors and designers, and producers as well. It’s like we’re one huge company and we get to run into each other again and again – sometimes dancing better together because we know each other; sometimes learning some new steps from each other or from visiting artists from out of town. It’s a pretty large cup, but still, it runneth over and over. 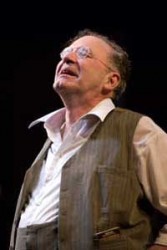 Rick Foucheux in ‘Death of a Salesman’ at Arena Stage, Photo by Scott Suchman,

Watch Rick Foucheux in scenes from the R. Buckminster Fuller: THE HISTORY (and Mystery) OF THE UNIVERSE at Arena Stage.