For a swinging afternoon with the rhythm and jive feeling of the 1920’s Harlem Renaissance you must see Spotlighter’s production of Ain’t Misbehavin’. Directed by Shirley Basfield Dunlap, this charming revue-style production brings the jumping sound of ‘Fats Waller and other black musicians of the 20’s & 30’s. The intimate nature of the show is perfectly suited for the venue’s stage allowing for the real feel of a jazzy little hot spot late at night somewhere up in Harlem. The five talented performers take great efforts to maintain eye contact and throw little opportunities of audience connectivity to theatre goers throughout the show, adding to the charm and fun. 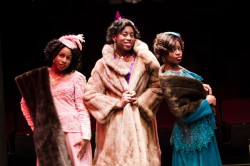 The audience is treated to an audio visual delight with fancy costumes, great choreography and amazing voices coming from the five performers. Costumes coordinator Fuzz Roark takes care in recreating the era with sharp smart suits for the two gentlemen and fancy brightly colored evening dresses with beaded bodices for the women. And the dancing is sensational. With musical direction provided by Stephen Felton and choreography by Mari Andrea Travis – the show brings the style of jazz swing with soul to the stage. The group numbers are laid out in a way that really makes great use of the stage, which is set in the round. Travis keeps the cast moving throughout the show to the upbeat tempo of the songs with well executed routines reminiscent of the time period. We see lots of close swinging partner dancing during “How Ya Baby?” between Christopher Jones and Dana McCants. It will keep your toes tapping and inspire you to want to get up and dance along with them!

And while the dancing is amazing – the voices on these five young performers will blow you away! Soulful, belting, expressive voices and it is a true rarity that all five of the performers are equally matched in this stunning talent. There are no weak players here. They make a powerful ensemble, performing fun-loving numbers like “Handful of Keys,” “Spreadin’ Rhythm Around,” and of course the title song, “Ain’t Misbehavin’.” 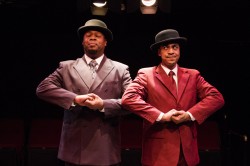 Tylar Montgomery, as one of the three females in the cast, is a tall vibrant woman with a powerful belting voice under her belt. She presents a beautiful grace when gliding across the stage during her solo “I’ve Got a Feeling I’m Falling” and changes quickly to an upbeat spunky bouncing girl for “Cash For Your Trash” a little later in the show. But her must see moment is in the sorrowful pining you hear in her voice and see in her eyes when she’s leaning against the pillar crying out in her song “Mean To Me.”

Anne Bragg is the perky little ingénue who gives us a laugh during her number “Yacht Club Swing.” In this moment the audience sees a gooey eyed showgirl eager to make her big break and she starts singing and dancing with moves and sounds similar to the Adelaide character from Guys & Dolls. She springs into a super high off-key falsetto that breaks glass but keeps the audience cheering. She’s a mover and a shaker with hips that swing to the beat in the girls’ trio number “Off-Time” and her shining moment is delivered in a mellow but mature jazzy version of “Keepin’ Out of Mischief Now.” Bragg uses this number to show a great shift in character, singing with a dulcet mellow tone, with a hint of good feeling. 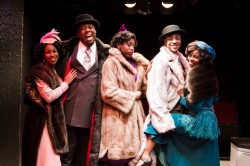 Watch out for the snake in the grass: Christopher Jones. A lively upbeat fellow he sends sly winks and sassy smiles to the audience every chance he gets! Jones has perfect enunciation during every musical number making his sound a crystal clear moment of perfection. He partners with Phillip Burgess in “Ladies Who Sing with the Band” and the boys really kick up their heels and run all over the space. A similar high energy dance and crazy jazz number can be heard from the both of them during “Fat and Greasy” and this time they get the audience singing along. Jones stuns audiences with his poison in “The Viper’s Drag.” You hear his smooth voice slither and slink as his body does the same, dance moves in slow motion on a stage bathed in red light. In that song he is fierce and set to bring the house down; an amazing performance that will bring you to your feet with whoops and hollers of applause. 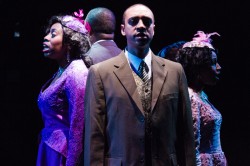 The cast singing ‘Black and Blue.’ Photo by Ken Stanek.

The show stealers – it was impossible to pick one because they were both so incredible – come to us from Dana McCants and Phillip Burgess. They even spend a fair bit of time singing and dancing together toward the end of the show in “Two Sleepy People” and “It’s A Sin To Tell A Lie.” McCants is bubbly, vibrant and is the most expressive face that you’ll ever see. Her eyes pop right off her face along with her dazzling smile bringing the audience to new levels of delight every time she graces the stage. Her voice during “Squeeze Me” is breathy but full, the perfect combination to mimic a real piano jazz longue singer as the silky sound floats to the audience’s ear. In this number in particular she doesn’t dance across the stage, she floats, slides, and glides, leaning against the poles, playing with her boa; capturing the essence of a girl of simple pleasures. And her facial expressions are priceless in the duet “Find Out What They Like” shared with Tylar Montgomery. We see happy, jealous, disbelief and a whole lot more but you’ll just have to see the show to see the amazement in this energetic performer!

Phillip Burgess fills the stage with his booming soulful voice and hot dance moves. He embodies the spirit of ‘Fats’ Waller himself as he belts out great fun numbers like “Your Feet’s Too Big” and “Handful of Keys.” He makes the most eye contact with various audience members and has ever changing facial expressions that keep you entertained. He dances well with all the girls and when sharing the stage with Christopher Jones. He really steals the thunder during “Honeysuckle Rose” and can move his whole body in ways that will keep the audience completely loving him.

It’s a jumpin’ joint for sure, down at Spotlighters, so make sure you get out your fastener and your best pressed suit before headin’ on down to Ain’t Misbehavin’.