For such a small venue, the stage at St. Mark’s Players is surprisingly well stocked. There’s a backdrop with a beautiful English garden, a table, chairs, an end table with books stacked up on it. All in all, Set Designer Cameron Lane has set a high bar for the night. As soon as the actors take the stage, it’s easy to see that Costume Designers Ceci Albert and Lisa Brownsword aren’t going to let the set design show them up. From the knickers to ascots, the actors seemed to have walked straight out of the 1800s and onto stage. As the play progresses, you slowly see what important parts Lane, Albert and Brownsword take, even if the audience never gets to see their faces. 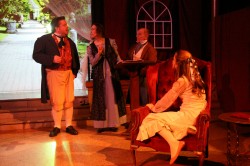 To state that Arcadia is a hard play to explain is an understatement. Set in a house in Derbyshire, England, Arcadia follows the lives of the people living in the Earl of Croom’s house, one group in the 1800s and one modern day group. While the Crooms and their guests spend their time involved with Romantic Poetry, Adultery, and Good English Algebra, the modern day Crooms and guests spend their time preparing for a regency-themed party, studying integrated algorithms, and studying the lives of their predecessors. Got that? Great.

Though Arcadia might be one of the most difficult plays to explain – and can be difficult to fully understand on its first watching – it is an entirely interesting, thought- provoking play – one that requires all involved to be on top of their game. With the set and costumes, St. Mark’s Players is off to a good start.

Kathleen Laird as 1800s, 13-year-old daughter of the house, Thomasina Coverly and her tutor Septimus Hodge, (Will Emory) take some time to warm up in their roles, as the chemistry between them is lacking. Part of this could be the problem with microphones. For such a small performance space, the amplified voices seem displaced, echo. The quick repartee that is the backbone of Stoppard’s writing isn’t there yet, though Stoppard’s witty lines are getting minimal laughs.

As more actors get involved – while still in the 1800s – Laird starts coming into her own, and Emory loosens up, becoming more enjoyable responding to the lady of the house, Lady Croom (Karen Lawrence). Lawrence commits to the overbearing woman who’s part is somewhere between the brilliant characters and the ones who seem completely lost. Watching Lawrence respond to the cast on stage brightens up the entire stage and seems to energize both the other actors and the audience. 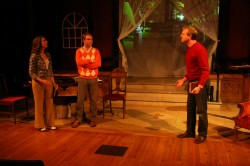 As we get to meet the “modern” cast – Caroline Schreiber as researcher Hannah Jarvis, Clyde Wright as pompous academic Bernard Nightingale, Rachel Watson as modern daughter of the house Chloe Coverly, and her brothers Valentine (Calder Stembe and Gus (Connor Smith) – the show becomes even more enjoyable. While Wright’s character is not meant to be likeable, it’s impossible to take your eyes off him whenever he’s onstage. His pompousness is acted perfectly and brings some of the first full laughs from the audience, especially when he and Schreiber get going in their own witty – if antagonistic repartee. The modern cast functions well as an entity – Watson embodying Chloe’s love-crazed sexiness, Stembel the sweet, academic brother, Schreiber and Wright playing off each other perfectly.

St. Mark’s Players’ production of Arcadia is a good way to spend a night immersed in this funny, sad, academic, and challenging play. Or perhaps a few viewings -because there are so many riches in Arcadia that you may want to see it again and again.

Here is the synopsis of Arcadia.