Sisters, sisters, there were never such devoted sisters. But switch ‘devoted’ for ‘insane’ and it’s not just the sisters, it’s the whole family in Vagabond Player’s production of Arsenic and Old Lace. Halfway through its 96th season, Vagabond Players presents the laugh-a-minute comedy directed by Sherrionne Brown. Take a pair of sweet maiden aunts, their three nephews – Mortimer who is insanely in love with the girl next door, Jonathan who is criminally insane, and Teddy who is just plain insane— and thirteen bodies piling up in the cellar and you have a recipe for hysterical insanity that will keep you on the edge of your seat with gut-busting laughter as the police come and go and all manner of surprises turn up and burst onto the stage. 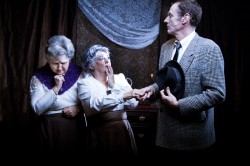 The Brewster house is not without its eccentricities, provided mostly by the residents, but it does have the antiquated charm expected of a Victorian era house in the 1940’s. Director Sherrionne Brown also assumes the role of set designer for this show and creates the intimate quaint feeling of a home with history behind it. The furnishings are well placed and help to enclose the space without making it feel too cramped. Portraits, complete with bubble-domed glass, hang from cords upon the wall, alluding to the plaster walls of the time period. Brown has clearly delineated the space with stairs heading up to the bedroom, a door with stairs leading down to the cellar and a passageway into the kitchen – all creating the brilliant illusion that the characters are in a real multi-dimensional house rather than just a furnished set upon a stage.

Portions of the insanity seen throughout the show are highlighted in the costuming design of Ann Mainolfi. She creates absurd outfits for the aunts to wear to the ‘funeral services’ composed largely of black and ruffles, but more poignantly huge black hats adorned with outlandish lace and feathers. Mainolfi also uses a subtly elegant touch when first introducing Elaine (Kate Shoemaker), Mortimer’s love interest. Shoemaker makes her appearance on the stage prepared to accompany her boyfriend to the theatre in a lavish blue silk gown with silver embroidery, accentuated by dripping diamond earrings with matching necklace and bracelet; the ensemble is topped off with a fancy fur stole draped elegantly over her shoulders creating quite the pretty picture. And keep your eyes peeled for the various outfits on Teddy. They’re most becoming for a young gentleman with stately affairs. 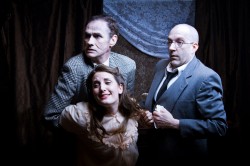 Brown’s direction provides great moments of hilarity throughout the show. All thirteen bodies work well together on stage, each one playing off the others with a sense of cohesiveness that really creates the image of family, however odd and dysfunctional, for the audience. The players are genuinely engaged with one another and appear to be having a ton of fun on stage; the mark of an excellent show. And no actor is without their quirks or hints of insanity. We see it most obviously in Teddy (Torberg Tonnessen) who believes he is actually President Teddy Roosevelt. Tonnessen commits to the lunacy of the character to laughable extremes, pausing every time he faces the steps to literally charge, as he shouts the command, thinking he’s charging up San Juan Hill. He presents as aloof yet completely aware of his surroundings and is entertaining from his disruptive bugle blowing to his very precise gesture of slapping his expedition hat on his head to head off to Panama – or the cellar.

Next comes Jonathan (Roy Hammond) who delves into the criminally insane. We see here an incredibly tall man; a situation of physical comedy arising as he is paired opposite Dr. Einstein (Eric C. Stein) who spends the show walking with a hunch. Hammond and Stein have an Abbott and Costello-like sense of humor about them, bumbling around on the stage but with malicious intent. Hammond creates a seedy, shady character in his upright posture and awkward grimaces, his signature move involving stalking right up into other’s faces with a murderous glare. While Stein relies on quirky well-placed one-liners and more physical comedy to deliver his comic relief in this show. But we see the best execution of physical comedy from Mortimer (Sean Mullin) who expresses his exasperation to new heights through almost exhaustive practices of spinning around the stage in scenes of conflict. Mullin masters his role and really uses the space given, often diving to answer the phone when it’s really the doorbell, and tripping over furniture as he overreacts to the insane secrets revealed inside the Brewster household. Mullin’s facial expressions are to die for; he creates a roller coaster of emotions on his face starting from his calm and gleaming smile at the beginning of the show, to his wild and manic eyes as he interacts with his aunts. 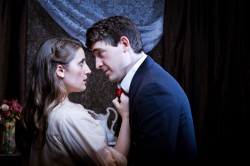 And where would the loony family be without Aunt Abby (Carol Evans) and Aunt Martha (Joan Crooks.) These two women portray the doddering old relatives; the type where there’s one in every family? In this family there are two and they work so well together you’d believe they were eccentric old sisters who in their seasoned prime have gone right off the deep end and into a pool of comedic lunacy. Evans is bouncy and bubbly as she dotes on Mortimer (Mullins) making wide eyes to express everything, be it excitement or concern. Crooks presents the slightly more aloof of the two sisters, having her mind in the sky but her gestures well grounded in the simple physicality stereotypical of a little old lady. Together the pair makes a dynamic combination of meddling, giggling women with bats in their belfry. Only in this case Crooks and Evans aren’t hiding bats in the belfry – they’re hiding bodies in the basement! Their nonchalance toward their misdoings is laugh-until-you cry funny, and they huddle together at the most inappropriate moments, well grounded in their bizarre reality.

This is one show not to be missed if you enjoy a good laugh. So avoid the elderberry wine, unless you’d like a direct trip to Panama, because insanity runs through this show. In fact it practically gallops.