Barber & Barberillo at The In Series

The In Series deals a ‘royal flush’ of magic and love and great singing as Rick Davis directs a talented group of singers/comedians in the operatic double-header of Samuel Barber and Giancarlo Menotti’s A Hand of Bridge (1959), and Francisco Asenjo Barbieri’s The Little Barber [‘barberillo’] of Lavapies (1874), in Barber & Barberillo. And for theatregoers who have not heard or seen zarzuela before – you are in for a real treat! 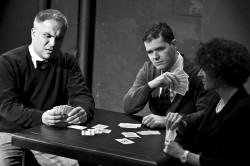 We begin with the powerful and regret-filled 1o-minute mini-opera A Hand of Bridge. Two couples – a businessman named David (José Sacín) and his wife Geraldine (Randa Rouweyha), and a lawyer named Bill (Alvaro Rodriguez) and his wife Sally (Chris Herman) – share drinks and spend another night of playing bridge together. As the cards are shuffled and unveiled – we learn what they are really thinking about as the game progresses. Let’s just say – they wish they were dealt a better hand in their lives.

All four cast members sing beautifully, but it’s Rouweyha’s stunning soprano that shines in this piece. As her gorgeous voice soars and she laments how she did not love her now-dying mother while she was still healthy – it’s achingly devastating. A Hand of Bridge may be a short opera, but it packs quite a wallop!

It was was a nice surprise when Producing Artistic Director Carla Hubner announced to the audience – before the performance began – that we would be hearing the songs from The Little Barber of Lavapies sung in the original Spanish with ‘supertitles’ translating it into English. The second opera of this ‘pocket opera’ double-header is lively, funny, joyous, very silly, and enjoyable. Elizabeth Pringle has written the English adaptation and dialogue and Director Rick Davis keep things moving at a brisk pace and receives fabulous performances from his very busy and talented cast. 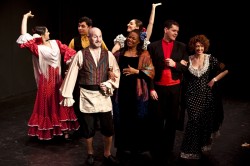 In The Little Barber of Lavapies – we are transported to Madrid to the Lavapies neighborhood where life is a little crazy and romantic and filled with kooky incompetent cops and guards  (a la The Keystone Cops and Gilbert and Sullivan operettas). There are also seamstresses, a group of neatly-dresses students, three Spanish dancers, and a suitcase that keeps changing hands. It’s all kinda loony, with lots of laughs, all enveloped in three short acts, filled with a beautiful score that is sung by a vocally talented cast.

As the opera begins, a very New Yorky sounding couple Marge (Randa Rouweyha) and her husband Larry (whose love has faded and who could use Dr. Phil’s help) – entertain and become part of the audience, and then are members of the cast of the zarzuela being performed on the stage – a la Kiss Me Kate. There they meet the barber Lamparilla (Peter Joshua Burrough) and a woman who’s great with the needle – the  seamstress Paloma  (Anamer Castrello). In love, they have that spark that Marge and Larry once had – and thus begins the journey of trying to help Marge and Larry rediscover their love while at the same time becoming part of the lunacy that’s occurring on the stage. I when Marge describes Larry while they are in the zarzuela: “I’ve never seen him so angry – or sing that well.”

There are so many fine vocal highlights in this production, but my favorites were Anamer Castrello’s energy and emotion-filled “Cancion de Paloma,” “Duet of the Majas, [Duos de las Majas]’ with Castrello (Paloma) teaching Rouweyha (Marquesita – her character in the zarzuela – how to act like a ‘Maja’ (the other women in the town) so she can disappear in the crowd and not be noticed. and the gorgeous singing of Castrello (Paloma) and Burroughs (her barber Lamparilla) in “Duo y Tirana,” where they tell each other what they did when the barber was in prison. It’s funny stuff and there was a lot of laughs coming from everyone in the theatre during this duet. 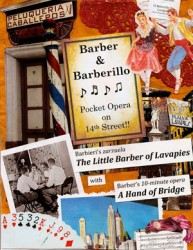 Musical Director Billie Whittaker (who is making her In Series debut tickling the ivories) and zarzuela specialist and Conductor José Sacín do a fine job backing up the singers, and never drown them out. Heidi Kershaw, who is from The Spanish Dance Society, provides the energetic, romantic, and seductive choreography, and  Marianne Meadows provides the lighting. Obel Susman Peña’s set is simple and colorful and has a barber shop, a table, and a dividing screen where women can change behind the screen into their clothes, and the floor of the stage has some funky white-looking designs. Donna Breslin designed the colorful costumes, with blues and teals for the students. Peach colored and polka dotted dresses add to the fun of the production.

Going to the barber has never been so much fun. Barber & Barberillo is shear magic! No te pierdas este entrenido.