Fela! at The Warner Theatre

The international touring company of Fela! makes a return visit to Washington, DC this week having recently played at the Shakespeare Theatre Company’s Harman Center for the Arts. Warner Theatre audiences are treated to a high-energy performance celebrating the life of Fela Anikulapo-Kuti, a Nigerian composer and musician who was a pioneer in the Afrobeat genre. Set at Kuti’s final concert in “The Shrine” in Lagos, Nigeria, Fela (Sahr Ngaujah) debates, in front of an international audience of admirers, the next step to take in his life. At the center is his struggle to decide whether to seek fame, fortune, comfort, and stability in the West, or stay in Nigeria and continue to focus on creating a positive force for political and social change. He remains grounded in the memory of his mother, Funmilayo (Melanie Marshall), one of the leaders of the anti-colonial movement in Nigeria. 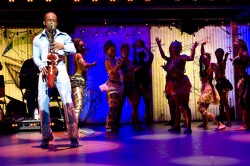 Sahr Ngaujah as Fela Kuti and the cast of FELA! Photo by Monique Carboni.

To be sure, Fela! is not a plot-driven musical, but rather a conceptual one.  This structural choice is both a blessing and a curse.  The audience is able to connect with Fela the performer and be exposed to his ground-breaking music. It takes the “connection” element one step further than most musicals. Audience members are allowed the opportunity to interact with the cast through some audience participation moments. These “let’s all sing and dance together” moments remind the audience members that they are at a Fela concert, but they may go on for a bit too long and allow the audience to lose focus.

Though the concert device has its merits, the audience is not is able to get to know the man behind the performer. Certainly, Fela was a brilliant musician, but beyond that, he was also a human rights and political activist. This fact is touched upon in the musical through a series of recollections, but never really fully explored with any kind of depth in Jim Lewis and Bill T. Jones’ book. Further discussing Fela’s interesting political experiences, which set him apart from many artists, in a more cohesive way would strengthen the show and allow the audience to understand how he remarkably transcended the line between art and politics at a time when that was not all that possible. The latter part of act 2 is much more successful in balancing entertainment with politics than act 1.

Grounded in Fela’s own experience, and that of his fellow countrymen in late 20th century Nigeria, the lyrics evoke the need to resist and move beyond the “Big Man” power structure which is so common in many post-colonial African nations.  They call out the corruption within the central Nigerian government, the social and economic disparity in the country, and the free-wheeling nature of the security forces, which create more security problems for the average citizens rather than solve them. Human rights atrocities, not usually a subject of song, are treated with unflinching honesty in “Sorrow Tears and Blood” and the testimonies that follow, which is perhaps the most compelling moment of the show.

Behind all of the encouraging ‘Yeah, Yeahs,’ (and yes, reciting those words is a part of audience participation) Fela’s songs emphasize the need for proactive social change in Nigeria, but also the broader African region coming to grips with independence from its colonial rulers. “Everything Scatter,” “Zombie,” and “Coffin for Head of State,” are particularly successful in alerting the audience of the problems in Nigeria and the need to find solutions to them. They are performed well by the cast led by Ngaujah.

Ngaujah brings this charismatic leader to life in the touring production.  With unstopping energy, passion, and commitment, he more than easily navigates the difficult challenge of embodying a real person putting on a concert.  In less experienced hands (Ngaujah has played the role on Broadway and the West End), such a performance could be imitative and lack any real emotional connection to those experiences that shaped Fela – namely, the influence of his mother’s political activist legacy and her unspeakable and violent death at the hands of Nigerian security forces. However, Ngaujah resists the urge to be “entertaining for entertainment’s sake,” even if the show’s concept creates that opportunity. 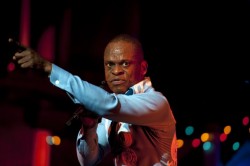 His strong performance, which includes him miming the playing of the saxophone quite realistically, is enabled by a strong ensemble cast of dancers and singers under the direction of Bill T. Jones. In particular, Paulette Ivory demonstrates her vocal talent as Sandra, a woman who Fela meets in Los Angeles who urges him on in his political cause. Her understated performance, clear vocals, and warm presence are very much a highlight. Perhaps an even bigger highlight is Melanie Marshall in the role of Fela’s mother. Giving a performance comparable to Lillias White on Broadway, Marshall’s powerhouse vocals and domineering presence embody the strong woman that was Funmilayo. Ismael Kouyate (Ismael) also delivers a strong vocal performance. His shining moment at the end of the show showcases his incredible vocal prowess.

Production-wise, some elements work while others do not. Bill T. Jones’ choreography is exquisite and ably performed by a cast of talented dancers.  Equally modern and traditional, it successfully highlights the line that Fela straddled between tradition and novelty. The 10-piece band allows Fela’s music to come to life. The saxophone and percussion parts in Jordan Mclean’s arrangements are particularly memorable.

Robert Wierzel’s lighting design is appropriate for a club-like setting.  Marina Draghici’s costumes are colorful, detailed, and very much of the time and place.  Her set design, however, is less effective. While it does resemble a performing space, it’s perhaps too clean and perfect to be “The Shrine.”

Most disturbing was the sound at the particular performance I attended. While Ngaujah was able to recover (with much charm) each of the four times his microphone went out, it took the audience out of the show. While it is understandable that these things happen in live theatre, it is particularly unfortunate when it happens multiple times in a performance and at points in the show that are the most intense.

Overall, the show is an interesting experiment which melds musical theatre with a concert-like format. A compelling cast allows Fela’s music and lyrics to be brought to the masses, including those which are just being introduced to him. It’s a risky show, but the payoff is big.

Running Time: The particular performance I attended was nearly 3 hours with a 30 minute intermission.