It is a powerful thing to watch the life of a woman unfold – as she goes through marriage after marriage to find her place in the scheme of things – each man defining her until and changing her until the woman that started the journey is no longer the woman that ends the journey. A strong moving revived work comes to Centerstage from playwright Bonnie Lee Moss Rattne – Gleam adapted from Zora Neale Hurston’s beloved novel Their Eyes Were Watching God. 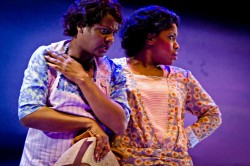 Gleam tells the epic tale of one woman’s unyielding journey through her loves and losses and all that falls in-between. The story is exploratory in its nature of Janie’s life, and audiences are treated to a powerful experience as they watch the character be shaped by the men in her life, the communities she comes to love and grow into, and struggles she faces along the way.

Like all shows not set in modern times where the dialect has shifted to a time, place, and culture of the past, Gleam is not without its challenges to the audience. Much like watching a Shakespearean play – some of the story gets lost in the text. Set in the early 20th Century somewhere in central southern Florida in an all Black community setting, the play takes on a dialect that is not common to the modern ear. At times, some of the clever details of the story are lost in the phrasing. The actors do their best not to speed through the dialogue – but there are times when the speech flies from their lips so quickly; especially in scenes of conflict between Janie (Christiana Clark) and Jody (Axel Avin Jr.) that the only thing the audience can take away from the scene is the raw emotion.

Olivier Award-winning director Marion McClinton brings a unique staging to this production – ensuring that the actors make use of the vast space. With set designed by Tony Award winner David Gallo, the stage is a tiered outdoors setting with porch steps, large trees against the back drop, and stone stoops. McClinton strives to create full use of the sprawling stage; having each of his actors committed in their movements rather than wandering aimlessly. The opening scene is picturesque – we don’t yet know the characters or their story but each person on the stage is placed in a space and utilizes it well. There’s a woman rocking in a chair up on the porch, another woman toiling in her flowerbed, a man hammering a fence post, another sweeping the floor; all of these actions create a sense of beginning and community and then as the main character comes down the raised plank across the back of the stage everyone on stage draws still. Moments like these and other staging choices really present beautiful imagery to the audience. 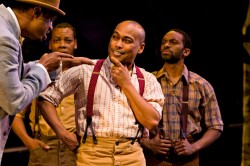 There is something to be said for special effects funneled through simple sounds and lights. And in this production Lighting Designer Michael Wangen and Sound Designers Rob Milburn and Michael Bodeen work together to create a series of intense moments throughout the show. The one that most easily comes to mind is the storm late in Act II. Storms are an easy thing to create on stage, a few claps of thunder, a few flashing lights to imitate lightning but this trio creates a believable terror in their storm as it sweeps the stage. White lights flash but only just before the claps of thunder; scattering and splitting across the stage looking like actual lightning as it would strike through the windows of a house on a darkened night. There are sounds of harsh winds and the thunder cues are timed to perfection creating a menacing feeling of a dangerous squall as it brews through the everglades. I’ve seen many storms on stage but none so terrifying and believable as the one created by Wangen, Milburn, and Bodeen.

The show itself tells a powerful story with emotions running high throughout most of the production. But there are times when the actors plateau at this peak of heightened emotion when perhaps they ought to pull back to create a more dynamic character. We see this most in Janie (Christiana Clark) and Jody (Axel Avin Jr.) Their interactions – especially once they’ve settled into the new town and have the store up and running – lack the build in emotion and tension that one would expect from such heightened scenes. Rather than gradually increasing volume and intensity during their fights they start off at the top leaving them nowhere to build to; – and this was a little disappointing. That is not to say, however that their emotional outbursts, especially Janie’s were not thoroughly heartfelt and extremely intense.

Christiana Clark as Jodie plays a very dynamic character, and the best thing about her performance is how her physicality is an extension of her expressive nature. Clark has anguish and anger, passion and confusion written all over her face, crying out through her voice at times which is then extended into her body as her arms reach out as if they could touch the sky. She has a stunning moment early in the show where has a fight with her Nanny (Tonia M. Jackson). Clark is staged on one side with her back facing Jackson, who is seated in the rocking chair. Clark holds a staunch physical defiance as she expresses the fight without ever facing Jackson; but the intensity and emotion of the fight are just as strong as if she were standing face to face with her; and when she does come face to face with Jackson it makes the moment all the more amazing. 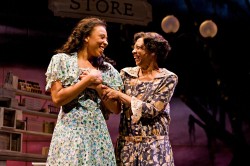 We find similar portrayals from Clark in her relationships first with Jody (Axel Avin Jr.) and later with Teacake (Brooks Edward Brantly.) Both Avin Jr. and Brantly create antagonists that drive Clark’s character to really define herself. Axel Avin Jr. as Jody starts off as a charismatic charmer but delves quickly into a man possessed by power. His shining moments are reflected best during the scenes with the town where his loud voice can be heard above all. Avin Jr. uses this bellowing voice through the whole show and I only wish that at more subtle moments – such as his final moments with Janie, he would have backed into something slightly softer. Brantly as Teacake has a similar approach to his character but rather than boisterous and commanding he’s young and fun loving. His scene-stealing moment is during the storm in Act II where the fear resonates across his face and is reflected in his voice. Both actors interact well with Clark and present intimate loving gestures to her when the script calls for it.

And don’t miss Pheoby  (Obie Award winner Stephanie Berry). While she may seem like just the narrator the intensity of which she employs in this character is incredible. Berry tells the story with great details even if it is only a few lines here and there between scenes, but she is engaged in her telling and engages the audience with lively eyes and a kind voice almost as if the story were her own. The most impressive thing about her performance is that she is often on stage, somewhere hidden against the backdrop simply the show as a mother does her children play. She is focused and never idles as she is watching and when she does interact with Clark’s character as a part of the story she listens intently and has a responsive face to all that is said.

Gleam is a dynamic work, compelling, and filled with emotion, wonderful design and performances – and is well worth the trip to Centerstage.