Drama comes alive in Scena Theatre’s production of Hedda Gabler, a non-stop emotional roller coaster laced with unrequited passion, strategic plotting and good old fashion jealousy and spite. This flavorful play by Henrik Ibsen – and adapted by Brian Friel – relies heavily on clever dialogue stuffed with innuendo, but when the characters are motivated into action, their choices are shocking and exhilarating to watch. Director Robert McNamara eagerly grabbed the reins of this loaded gun of a play and without a doubt, lead it into a heart pounding state of drama, anxiety and passion. 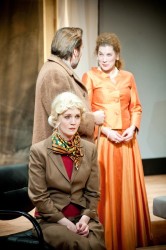 Hedda Gabler (an impressively sensual and thought provoking performance by Kerry Waters) and her new husband George Tesman (Lee Ordeman’s giddy caricature of an academic inspires both surprised laughs and sympathy) return from an academically charged honeymoon to their streamlined, 1930’s home. Any time Waters appears on stage there is no other choice but to watch her act and react, even if her movements are as subtle as rearranging a sideways photograph. Her stage presence fills the entire theater, though several of her cast mates managed to successfully steal our attention, especially when Ordeman enters playing unknowing fool to Waters’ succubus, she has no real competition.

George’s Mother, Juliana Tesman (a deliciously commanding Rena Cherry Brown was both sweet and smart) and his life long nurse and maid Bertha (a stalwart and loyal Mary Suib) comically fret over their dear George despite the delicate situations that surround them. Judge Brack (a humorous and selectively dangerous Jim Jorgensen) continuously drops by with both important and trivial gossip, eager to stir something up with the people he claims as his friends, using his words to create an emotional storm.

Ellert Lovborg (an impressive portrayal of genius lost by Eric Lucas) and Thea Elvsted (the beautifully love lorn and true innocent Danielle Davy) effortlessly twist the plot into decedent and dramatic momentum. Their mere presence alone is enough to drive Hedda into a manipulative state of planning and jealousy, though her motives rarely make sense initially. Set Designer Michael Stepowany and Costume Designer Megan Holeva bind the show into its final presentation with clean, timeless designs, perfectly contradictory to the emotion and drama being played out.

Heda Gabler is a true introspection of the human condition and will certainly be hearty food for thought for any true drama lover. Audiences beware the delightfully shocking use of guns and be prepared to ride the ups, downs and twisting loops of this classic drama.

This a 5-star  thought provoking, comedic and emotionally charged production. Don’t miss it!