Interview with Suzi Eldridge on McDonogh School’s Benefit This Friday and Saturday January 20 and 21, 2011 @ 7 PM 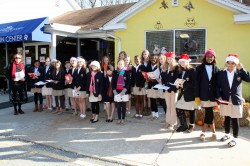 The McDonogh Choir Caroling at The Humane Society.

McDonogh School in Owings Mills Maryland has long been highly regarded for its flourishing performing arts programs. Here, Suzi Eldridge, onstage director for the middle school, shares what makes McDonogh special, and explains the upcoming benefit performance of Children’s Letters to God, and why it is close to her heart.

Teresa: What is your role at McDonogh and when did you begin your job?

Suzi: My current role at McDonogh is Middle School OnStage Director. The Onstage class is a hybrid that teaches students with a desire to perform the skills they need to be comfortable on stage in theater, voice, and movement. I came to McDonogh seven years ago after spending ten years teaching choir and drama in the Carroll County and Frederick County Public Schools. I had driven past McDonogh numerous times and wondered what was beyond that corn field. I decided to satiate that curiosity by coming to see a performance of Footloose. 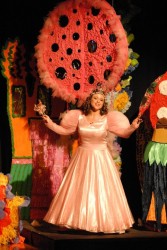 Suzii as Glinda in ‘The Wizard of Oz.’

I was in love with their campus, community and Arts programs and wanted very much to be a part of it, but I was told that once people got hired at McDonogh, they never leave, so my prospects of getting a job there was very small, or so I thought. The summer before I started at McDonogh, I was choreographing Annie for Glyndon Area Players where I began to teach private singing lessons to Molly Janiga, a McDonogh student. She told me that McDonogh had an opening for a Middle School Choral Director and I went in for the interview. I was offered the job and have never looked back!

What inspired you to work with young performers?

Growing up in the New York City public school system was very difficult for me.  I was always bullied for my interest in the Performing Arts. When I was in eighth grade, I watched the movie Fame on television, and I dreamed of going to a school where everyone loved what I loved! After auditioning with thousands of other hopefuls, I was accepted. I always looked up to my instructors there. They were not only teaching music, theater and dance, but they were also living it, performing at night, on the weekends and over their summers. One of my singing teachers would take us into the community to perform at retirement homes, at festivals and fundraisers and I always felt that we were giving something back to the community. Those experiences help shape my future as a music educator. I knew what I didn’t want, I never wanted to teach music from a cookie cutter text book, or reaching to kids how to be a performer without regularly doing it myself.  My goal was to give students a performance, and service based education one which they learned by doing and giving back. I believe that music is a gift that should be shared at whatever level you can make it. You do not need to be a “professional singer” to make an elderly woman in a wheel chair smile, or make an autistic child communicate better.

How did Letters to God come about?

Each year I like to try something new with my classes. Last year we had an arts festival, the year before that a 1950’s coffeehouse performance. This year I wanted to have the kids experience the process of putting together a musical. I was looking for a musical which had some depth to it, and touched upon issues that middle schoolers were dealing with. I had read the book Children’s Letters to God and when I saw the musical listed, I thought I would give it a try. The show deals with issues of life and death, first love, sibling rivalry, and the fear of being ‘unathletic.’ The show is much like Charlie Brown  in that it is a group of kids with unique personalities who deal with everyday life the best they can. The show is not pointed toward any one religion, yet deals with questions that kids from every religion, and culture ask at one point or another.

The performances will take place on this Friday, January 20th and 21st at 7 pm and 2:30 pm in the Black Box Theater at McDonogh School in Owings Mills, MD.

Admission is free, but donations will be accepted in honor of our Communications Director Lynn McKain who has stage four breast cancer. All proceeds will be donated to the Red Devils Cancer support group.

What ages are your performers?

The performers are all in eighth grade 12-13 years old.

How have the children responded to the subject matter of Letters? 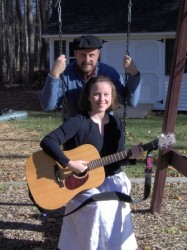 Suzi and her singing partner Chris from’ Albarino and Friends.’

At first, they were very shy about the subject matter, but after digging into the script and music, they were very enthusiastic. The biggest challenge for them was the music. The score has many key and time changes throughout which is difficult for young singers to hear. Being a school that offers many incredible courses, and extracurricular activities, rehearsing the musical was also a challenge. We are hoping that the snow days stay away until February.

Knowing that the musical will serve as a benefit for a good cause, has given the students a lot of motivation in their performance. Cancer is so close to home for many of them and it is very sad.

What is your performance background? Are you still performing?

I have been performing since I was about eight years old. I started out in community and dinner theater, performed in the Miss America preliminaries to raise money for college, Opera and Choral music during my undergraduate and graduate school years and back to musical theater again as an adult. The past few summers I have performed with the Glyndon Area Players as Glinda in The Wizard of Oz, Tzeitel in Fiddler on the Roof and The Wardrobe in Beauty and the Beast. I also sing with the group Albarino and Friends at coffee houses and wineries throughout Maryland.

What is up next on McDonogh’s stage? 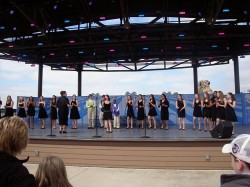 There is so much up, it will be difficult to say in a short article. Click here to see the upcoming performances McDonogh has to offer in Dance, Strings, Band, Choral Music, Theater and Musical Theater.

Coming up next for the Middle School Choir is a performance and workshop trip to Walt Disney World in March. The performing arts opportunities at McDonogh are endless. Each and every faculty member strives to give students a performance based education to prepare them for conservatory and beyond.

Listen to samples of the score from Children’s Letters to God: A New Musical from the CD  cast recording.