Laughter on the 23rd Floor at The Keegan Theatre

I’ve seen musicals at Keegan Theatre before and enjoyed them, but this was my first time seeing a play, and I am glad to say that it was no different – another fine production. Neil Simon’s Laughter on the 23rd Floor is about an office full of harried writers in charge of producing a satirical television show in 1953 – a period when the government influenced the people with xenophobic fears and the threat of censorship, and when Neil Simon himself and his brother Danny wrote for Sid Caesar’s The Show Shows. Laughter on the 23rd Floor provides a great parallel to events in today’s society and political climate. 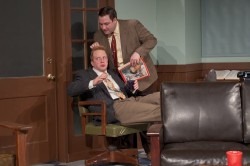 Dan Van Why and Matt Dewberry. Photo by Jim Coates.

As I sat in the second row before the show started, I gazed upon the set design by Samina Veith with set dressings and properties provided by Carol Baker. I stared at an office that looked authentic all the way down to the crumpled paper in the trash bin by the real bagels on the break table. Then the lights dimmed and I heard the cast move to the stage past the audience risers where I awaited the lights to come back up.

Act One served for more exposition than anything. It opened with a solitary figure at a desk, Lucas Brickman (John Loughney) who would become the story’s narrator – though the story is not all about him – – talking about being on work probation to prove him worthy of being a full-time employee.

After Brickman’s introduction, each character who worked alongside him made their entrances into the suite bringing their unique and lively personalities with them. The writing team, comprised of Milt Fields (Matt Dewberry), Val Skolsky (Bradley Foster Smith), Brian Doyle (Dan Van Why), Carol Wyman (Brianna Letourneau), and Ira Stone (Michael Innocenti), all gathered in the small office and bantered back and forth with a chemistry that was organic. Everything, like the set, was authentic right down to the accents of each person. And they were funny!

Finally, their boss -and star of the show they write for – Max Prince (Ray Ficca) – makes his entrance and takes his pants off for pressing. It is clear from his demeanor – that the character has quirks and a heated disposition that only he and his staff understand, but are equally endearing. Together, he and his writers,mull over the possibility of the network cutting their show down to one hour.

Act two is truly where things pick up and the breadth and depth of the plot shows, and where I witnessed the most notable performances of the evening. Even though the word ‘laughter’ is in the title – and as is with other Neil Simon plays – there are zingers that make you howl with delight – there are themes that run much deeper and are thought-provoking including proving your worth and fighting to survive.

Letourneau provides a memorable moment when she tells her colleagues she wants to be viewed as a writer rather than a woman while she worked during her pregnancy at the office.

Other notable performances come from Ficca, Innocenti, and Dewberry – who collectively steal the show with their antics. Ficca’s journey from Act One into Act Two depicting the descent of a man from damaged to borderline insane proves effective and gripping. The character always keeps the audience guessing about what he would do next. Innocenti’s raging hypochondria and Dewberry’s slapstick humor help make each moment fresh without feeling like the jokes are forced.

The most notable aspect of the entire production, however, is the ensemble work, which can be attributed to Director and Keegan company member, Colin Smith. It was clear that his direction made every character listen to each other at all moments from the comedic to dramatic as the audience followed the journey of the office over the course of several years. The connections held strong from the introduction of the company until the end when they receive news about the future of their show.

If you are a Neil Simon fan, a fan of Sid Caesar and Jackie Gleason, and a writer – and just want to go back to the good ol’ days – this is the show for you. Buy a ticket or two, sit back, and travel back to the Golden Age of Television.

Don Michael Mendoza came to the Maryland Theatre Guide team from Pittsburgh, PA. He studied musical theatre and journalism at American University. He’s concurrently employed with American University Communications and is the volunteer Theatre Coordinator for BloomBars – a not-for-profit arts center in Columbia Heights – since graduating in 2010. He is also an active actor in the DC/MD/VA region participating in multiple plays and musicals a year.