‘Life on The Farm’ Comes to Single Carrot Theatre in ‘MilkMilkLemonade’ 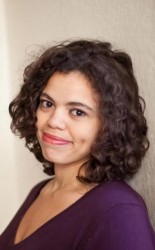 Joshua Conkel’s MilkMilkLemonade brings to life the tale of a very normal adolescent boy. Emory is 11 years-old and lives on a farm with his Nanna just outside of Mall Town, USA. He has chores, homework assignments, and a best friend. His best friend happens to be a 6-foot tall talking chicken, but Emory doesn’t mind. When he becomes entangled in a romance with local bully Elliot, things get complicated. Emory is dealing with his budding sexuality, the possibility of losing his best friend to the meat processing machine, and a complicated relationship with his aging grandmother, all while trying to follow his dreams of being a star.

Aesthetics are an integral part of the production, particularly the campy nature of the show. Camp has permeated much of today’s pop culture, allowing flamboyance, color, and big personality to infiltrate the masses. “Camp is a huge inspiration,” says Director Nathan A. Cooper. “The challenge is finding the balance between the larger-than-life nature of the show, and the sincerity of each character.” Choreographer Sarah Anne Austin echoes Cooper’s sentiment, “Balancing the camp aesthetic with the specificity of each character was a challenge. I wanted the choreography to be true to the script, but also reflect the work of the actors and director.”

The design elements of the show provided their own set of challenges for the crew at Single Carrot Theatre. Lighting Designer and first time Single Carrot collaborator Adrienne Geiszl was initially challenged by the dichotomy of the script: “My biggest hurdles have been the back and forth between the real farm, and the moments where we see the farm through Emory’s eyes. It’s a bright and sunny day on the farm, even though there are some pretty dark things happening there.” She’s quick to add her excitement as well, “You had me at parasitic twin and talking chicken,” she says. It’s not just lights that gave the design team a unique opportunity to meld two worlds. “Instead of sculpting an elaborate and immersive soundscape, MilkMilkLemonade calls for brash and over-the-top pop music,” adds Sound Designer and Stage Manager Steven Krigel. 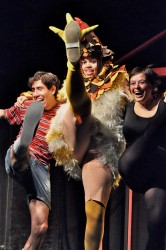 Despite the sugar-pop soundtrack, the characters in the play offer a lot of depth: the death, the love, the struggle are all real and visceral, but the contrast of that reality against the narration of a Lady in a Leotard is a fine line. Lady in a Leotard is an often unreliable narrator, but her foibles make for much of the camp to which Cooper and Austin refer. The bold nature of Conkel’s writing isn’t lost on the cast and crew, and they relish it.  “I love not worrying about being P.C.,” says Cooper. “Conkel challenges our assumptions and beliefs and he forces you to back up what you believe in, but it’s not an after-school special. It’s a story”.

Ensemble Member Giti Jabaily plays the bully who falls for Emory, torturing him all the while. “He is bold and vulnerable”, says the actress of her character, Elliot. “He is navigating his identity. From day one of rehearsal, I connected to Elliot like I would connect to a good friend. He has so many layers.” 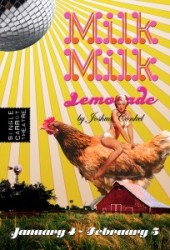 Working with an ‘All-Carrot Cast’ has been a fun departure for the company. “It’s one of my favorite parts of the show,” says Cooper. “Together, the ensemble brings a level of dedication and intelligence to the process that is uniquely Single Carrot”, adds Krigel. The cast is excited to be together onstage, some for the first time in years, “I can’t even begin to describe the fun of getting to play the stage with people I love and respect and who challenge me as an actor”, chimes in Elliott Rauh, who plays Nanna. “We’re a family,” says Genevieve de Mahy, who plays Lady in a Leotard. “It’s just fun”.