The American Century Theater presents Little Murders written by Jules Feiffer, a dark comedy story about a family living in New York City circa 1966, when violence is on the rise. Although written in 1967, some of these family members could easily be members of today’s Tea Party movement. 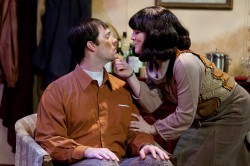 James Finley as Alfred and Robin Covington as Patsy. Photo by Dennis Deloria .

Patsy Newquist, a  27 year-old successful business woman (Robin Covington) brings boyfriend and photographer Alfred Chamberlain (James Finley) to meet her parents – Marjorie (Emily Morrison) and Carol (Craig Miller). Carol despises his ‘girly’ name, and there are numerous jokes about it. Comically, the show starts off as he rants to his wife that he wishes he would call him “dear” instead of Carol.

The apartment set-up, designed by Patrick Lord, shows the dining table and living room in one space, there are several doors that lead to either bedrooms or the bathroom, and each time a character uses the bathroom the audience can hear the toilet flushing. The wallpaper is coming off in a couple of places, and the furniture looks inexpensive, but there is a feeling of comfort and home-iness that radiates from the stage. The costumes are designed by Rip Claassen, and they are era and age appropriate. The lighting design by Liz Replogle is simple but effective.

Ellen Dempsey does a fine job of directing her talented and energetic cast, who all give tireless performances. However, the play itself is sped through, leaving little time to take in all the action. Because this is a story of a dysfunctional family, most of the characters are overly-dramatic like Marjorie (Emily Morrison), who upon bringing dinner yells “come and get it!” with a great smile, and then speeds through a story about how her mother would always yell that before dinner. A minute later, the family changes the subject for another five minutes, and then only a half hour into the show, Patsy decides to marry the aloof Alfred. Lunacy abounds.

The play proceeds in this rapid pace through its entirety, moving from one conversation or action to the next without pauses or reflection, making it seem somewhat scattered. I would have preferred if the pace had been slowed down a bit, so I and the audience could have digested everything that was going on.

Alfred (James Finley), who is practically mute during the first half of the play, is the calming force throughout this fast-paced production and he steals the show. As the family rambles on in exchanges and quips, Alfred is like a member of the audience, looking at his surroundings and trying to take in all that is happening, which proves to be a hilarious contrast with the hysterical Newquist family. Finley’s funniest moments are when he unexpectedly zones into daydreams during long speeches or stories, and hums little tunes while this head is rolling and his eyes are closed. The heartiest laughs of the evening are while Finley is on the stage and he is  a pleasure to watch because he is just as befuddled at this family as the audience is. 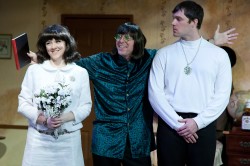 The ever-suffering Kenny Newquist, (Evan Crump), is Patsy’s younger brother who lives with her parents and is a graduate student. Kenny mostly watches the drama that ensues from the sidelines while reading avant garde literature assigned for school like The Harlots of Venus, or Vogue magazine, glancing over only to make witty comments.

Bill Gordon is hilarious as Henry Dupas  – a wild ‘minister’ for the “existentialist church” that performs Patsy’s and Alfred’s wedding ceremony. His stunning speech about the meaninglessness of societal institutions, including marriage is the highlight of the production. Dressed exactly like John Lennon, same hair and round glasses, he is either happy or on drugs but, either way he always says “it’s alllllright.” Gordon is quite ‘alllllright.’

If you love dark comedy and are dying for one of those murder mysteries about a dysfunctional family and are ‘paned’ to find out who did it and why, come see the hard-working cast try to figure it all out in Little Murders at American Century Theater.

Running Time: One hour and 45 minutes, including a ten minute intermission.