Theatre Kibbitz: Nu Sass Goes ‘Into The Woods’ and Socks it to the Audience! 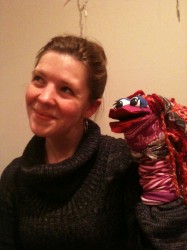 Libby Sinback with the Bakers Wife. Photo by Aubri O'Connor.

I love Into the Woods, but this upcoming production of the Sondheim musical at Nu Sass is a real ‘stretch.’ I asked Aubri O’Connor to sock it to us with all the information.

“Once upon a time, in the summer of 2011, local singer and karaoke host Libby Sinback had this sort of crazy idea. “I wish!” She thought, “I wish I could produce a concert version of a musical I loved as a kid growing up, and take a lead role in it.” She shared this idea with her friends and they all thought, “That’s a cool idea!” And for about a week or two, she was all energized about figuring out how to make it work, talking to people she knew in the theater world about logistics, venues and such. But over time the momentum slowed, and her wish faded with it. 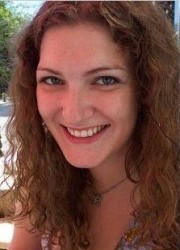 Unfortunately for Libby, she had told her friend Aubri O’Connor about the musical.  Aubri loved the idea from the start, and had already started telling singers, and the press, about the project. Before there was a cast, or musicians, or a musical director, or anything… Libby’s wish had taken seed in Aubri’s imagination, and Aubri was a co-producer at Nu Sass Productions – a growing theatre company in DC that is specifically designed to help women create and engage in theatre in ways they wouldn’t otherwise be able to. The seeds of innovation Libby planted in Aubri’s mind grew almost overnight. There would be cross casting! A female baker perhaps? Maybe a female narrator, too. Nu Sass is founded on the idea of gender blind casting, after all, and what girl hasn’t sung along to a male verse thinking “I could do that”? 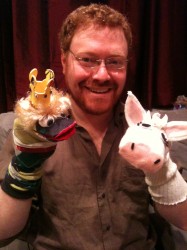 There would be a limited run, maybe only two nights. Just enough time to let everyone see it, but short enough to keep it special.

There would be whimsy. Sock puppets, sight gags, kazoos, funny voices and characters, winks to the audience, and maybe even audience participation!

Most importantly it would be free. Every child, working parent, unemployed job seeker, and tapped out theatre goer would be able to see this show if they wanted. And they could eat a rice krispy treat while doing it.

Best of all, it would happen in time to commemorate the 35th anniversary of the musical. 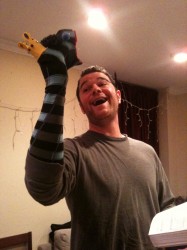 So, here we are 6 months later. Auditions and rehearsals have been held in a tiny 3 room apartment. 15 actors have donated their time, talent, and voices to a project they all love. 22 sock puppets have been built in a flurry of felt, yarn and hot glue guns. 1 talented pianist has offered his piano, sight reading skill, and infinite patience to ensure there would be music for the cast to sing to. Innumerable generous people donated to the kickstarter to help pay for the inevitable expenses even a concert performance incurs.

All of this because Libby had a wish, and Aubri had a path through the woods. 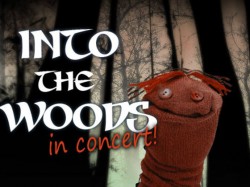 Nu Sass Productions and KKVC invite you to come see this very special, irreverent, hilarious version of Stephen Sondheim’s classic musical, Into The Woods. Performances will be Friday, January 13, 2012, at 8pm, and Saturday, January 14, 2012, at 7pm. All tickets are free and donations are suggested to help cover performance expenses.