The Gaming Table at Folger Theatre

Folger Theatre presents The Gaming Table – a comedy written by Susanna Centlivre, an 18th Century dramatist who helped blaze a trail for women writers, with modern material added by David Grimm. Director Eleanor Holdridge fittingly works with a design team that is made up of talented women, and together they breathe new life into an old masterpiece, and offer contemporary culture a chance to enjoy it once again.

Scenic Designer Marion Williams hides the set behind a large tapestry depicting a queen-of-hearts playing card when, once removed, reveals handsome staircases of polished wood, intertwined in a way that hints at artwork similar to the famous M.C. Esher’s lithograph “Relativity,” where rules of logic are ignored and confusion reigns (humorously enough, only the male characters find themselves lost amongst the maze of stairs). These staircases lead to an elegant parlor, adorned with felted wallpaper and luxurious pieces of furniture. Sound Design by Veronica Vorel helps to set the tone with clinking coins set against lighthearted music, and pleasant lighting by Nancy Schertler is used to round out the atmosphere. 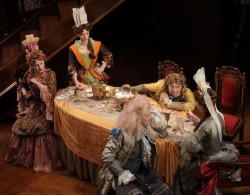 However, the extraordinary design award for this show should go to Jessica Ford, whose elaborate costume designs make Marie Antoinette look like a scullery maid. Ruffles, fringe, lace, bows, buttons, buckles, blossoms, and clasps can all be found trimming one outfit, while sparkling jewels and beads outline bold, colorful fabric, which is playfully modernized with patterns such as cheetah print. Sparkly headwear sits atop intricate wigs and reaches skyward – the effect is mesmerizing and hard to look away from.

Naturally, such wonderful effects deserve equally superb support – which is where the powerhouse cast comes in. Julie Jesneck is outstanding as the lively Lady Reveller, a bold, outspoken woman whose lavish lifestyle begets scolding from her stern uncle (Michael Willis (Sir Richard Plainman) and principled cousin (Katie deBuys (Lady Lucy). Undeterred, Lady Reveller continues to host gambling parties in her quarters on a nightly basis, cavorting with likes such as rakes and coquettes (an excellent example being that of Sir James Courtly, played  by Michael Milligan, whose character is ironically viewed by those around him as the most masculine, while also displaying the most effeminate mannerisms).

Manipulation, deception, and trickery reign supreme as the characters play for their hearts desires in a game that is far more metaphorical than literal. A wonderfully exasperated, foot-stomping Lord Worthy, played by the fantastic Marcus Kyd, vies for the affections of Lady Reveller, with whom he has a passionate love/hate relationship. Emily Trask is amusing as Valeria, a socially awkward woman who finds true love with science and biology, and perhaps a man as well (Robbie Gay, the sweetly coy Ensign Lovely).

However, the most entertaining scenes come from the characters of Mr. and Mrs. Sago, outrageously played by Darius Pierce and Tonya Beckman Ross. Hardly as wealthy as her peers but desperate to be a part of the social circle, Mrs. Sago seems to have her admiring husband on a string as she gets him to hand over money by the pocketful, needing only a simple pout of the lips or the wiggle of a finger. Their teasing interactions and playful chemistry are the highlights of the production. Emily  Townley also yields plenty of laughs as Alpiew, Lady Reveller’s loyal and wittily candid handmaid.

With breathtaking technical designs and some of the best directing and acting I’ve seen in years, The Gaming Table is well worth one of your evenings. It’s an extraordinary battle of wits and banter in a play where the women are strong-minded and independent, and the men, well…they just have to deal.

Running time is approximately 150 minutes, including a 15-minute intermission.