On the Road: The King and I at Walnut Street Theatre

The Walnut Street Theatre, the oldest and most subscribed to operating theatre in the country, is currently offering the Rodgers and Hammerstein classic, The King and I, to the delight of Philadelphia theatre audiences. It’s easy to see why this great musical continues to endure even after 60 years. The themes of love, loss, and identity still resonate with modern audiences, and the songs- particularly “Hello Young Lovers,” I Whistle a Happy Tune,” and “I Have Dreamed”- are timeless. 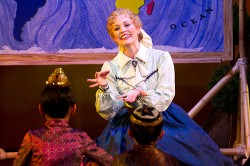 Rachel York as Anna in ‘The King and I’ At Walnut Street Theatre. Photo by Mark Garvin.

At the center of this story is Anna Leonowens, a widowed English school teacher who is summoned with her young son to teach the royal children in Bangkok, Siam in the early 1860s. Rachel York steals the show as ‘Mrs. Anna,’ a woman ahead of her time who believes in gender equality, the power of education, the need for progression, and true love. Upon her arrival in Siam, Anna stands up to the King (Mel Sagrado Maghuyor) and, through her strong presence and conviction, begins to break down traditional barriers in the society and within the royal family.

In less capable hands, Anna can be played as a caricature of the modern woman going against ‘the barbarian natives,’ but York avoids this and plays the role in a domineering, yet organic and natural way. She makes it clear that Anna understands the political and social situation in Siam and needs to find the most appropriate ways to deal with it- both as a person and as an instructor to the royal family. Throughout the show, York shows Anna’s progression in a very apparent way. Coupled with her acting choices, which are brilliant, she sings the timeless score beautifully. Her “Hello Young Lovers” is a particular standout and possibly the best rendition we have heard.

If Anna is the center of this production, the King is less so- as it should be. This situation is far more in line with Rodgers and Hammerstein’s original intent as the show was meant to be a vehicle for Gertrude Lawrence before Yul Brynner made the role of the King his signature in the film and multiple stage revivals. 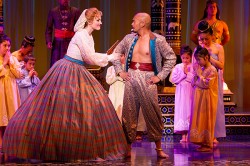 Maghuyor is less than successful in making the audience immediately believe he is a strong, powerful King at the outset of the show. In his initial scenes, his presence is felt, but it’s unclear whether he truly is powerful or he just wants to be seen as such. Maghuyor comes off as more complaining than domineering at the very beginning of the play and because of this, his great transformation from a so-called ‘barbarian’ to a ‘feeling man’ as a result of Anna’s influence is, perhaps, less apparent and obvious. Nonetheless, his “A Puzzlement” (despite the odd athletic choreography) and “Song of the King” are well-sung. He displays a remarkable level of chemistry with the rest of the cast and York especially.

At the periphery of the story of Anna and King, are two young lovers- Tuptim, a princess from Burma, and Lun Tha, her secret lover. Their romantic journey, which has an impact on the King’s relationship with Anna and his views on the place of women, is well-played out on the Walnut Street Theatre stage. Manna Nichols and Austin Ku, respectively, make the audience feel for their plight and their two musical numbers, “We Kiss in a Shadow” and “I Have Dreamed” are sung with great emotion.

The production has several other acting and singing highlights. Angela-Lee Aspiras tackles the role of Lady Thiang, one of the King’s wives, with great presence and maturity. Her rendition of “Something Wonderful” is just that – wonderful. Noah Breymeier portrays Prince Chulalongkorn (the next in line to the throne) with great curiosity, which is fitting for his character. He is particularly effective in the final scene where he finally comes to terms with the idea that he can be a force of societal change in this traditional society as he assumes his royal duties as his father dies.

Director and Choreographer Marc Robin keeps the show moving at a brisk pace, though sometimes at the expense of the tempo of the great ballads in the score. There are cuts in the some of the songs. For example, “I Whistle a Happy Tune” is cut in half, one verse in “A Puzzlement” is missing, and there is a small cut in the foxtrot in “Shall We Dance.” There is also some of Captain Orton’s dialogue missing in the first scene. These cuts are unfortunate, but not a huge detriment to the overall quality of the production.

His “Small House of Uncle Thomas” ballet, however, is very effective. It is done in its entirety with all of Trude Rittman’s original dance music intact. It is performed exquisitely by the ensemble cast.

Musical and Vocal Director Douglas G. Lutz’s orchestra of only eleven players, which did not include any live strings, played the score beautifully. However, the string section was sorely missed considering the show is very string-heavy. Robert Russell Bennett’s original orchestrations as a result, sound a little thinner than they should in this production, particularly in the lush ballads.

Scenic Designer Robert Andrew Kovach’s sets generally serve the production well although the cardboard cutout Buddha statues could have been replaced with something a little more realistic looking. Colleen Grady’s costumes and Joseph Simon’s lighting do what they need to do without getting in the way of the action. The costumes, in particular, are time and place appropriate.

Overall, Walnut Street Theatre’s production of The King and I does exactly what it is supposed to do: it reintroduces a classic musical to a new generation. It is worth the trip to Philadelphia and to this historic theatre, which used to be a prime Broadway tryout house, just to see Rachel York’s sensational performance.