The Musical of Musicals! The Musical! at The Fredericktowne Players

The cover of The Fredericktowne Players’ program for The Musical of Musicals! The Musical! boasts “37 musicals for the price of one!” Long before actress Jeanine Collins belts out “Did I Put Out Enough?” (a tune vaguely reminiscent of Jerry Herman’s “If He Walked Into My Life” from Mame), you know you are in for a zany evening of theatre. 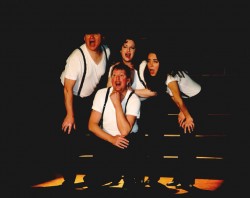 The premise of ‘MMM’ is simple: a cast of four actors will present five different versions of the same story in the style of five different musical composers; respectively Rodgers & Hammerstein, Stephen Sondheim, Jerry Herman, Andrew Lloyd Webber, and Kander & Ebb. Oh, yeah, and the story happens to revolve around a young woman who can’t pay her rent.

Creators Eric Rockwell and Joanne Bogart have penned an insanely authentic parody of these five composers/teams, and DC Cathro is a director who knows his source material intimately. Cathro’s brisk, minimalist staging hits all of the right notes, and music director-accompanist Jonas Dawson is a virtuoso pianist who highlights every nuance of the brilliantly clever score. Choreographer Christine Galante captures the signature movements of all five composer-genres, most particularly the Fosse-esque twitching of Kander & Ebb. 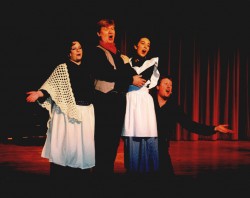 In this production, as in all the best lampooning of musical theatre, the performers fully match the abilities of the original Broadway stars. Jeanine Collins demonstrates that she can sing as well as any Broadway diva – in fact, she proves to be at least five Broadway divas in one. Likewise, Jessica Billones showcases her range by pivoting on a dime from legit soprano ingenue to belty Patty LuPone-like hellcat. Steve Steele captures a classic matinee idol charm in his many roles, warming the audience with a rich baritone singing voice. Brother Chris Steele also brings vocal versatility and an impish sense of humor as the various villains of the piece and he particularly shines as the strange hybrid of George Seurat and Sweeney Todd in the Sondheim segment. 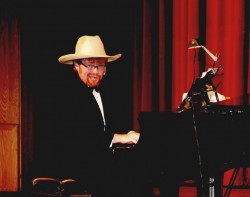 The only caveat I would pass along is that you have to be pretty “musical theatre savvy” to fully appreciate the material. If you are a musical lover, however, you won’t find a smarter parody anywhere… or a better executed production!

The Musical of Musicals! The Musical! plays through February 5, 2012, at Fredericktowne Players at Jack B. Kussmaul Theater at Frederick Community College – 7932 Opossumtown Pike, in Frederick, MD. Purchase tickets here.