The Snowy Day at Adventure Theatre

Adventure Theatre presents The Snowy Day, a production based on the award-winning book by Ezra Jack Keats. Jessica Burgess directs the story of a child exploring his first snowfall to life, with music and lyrics by Darius Smith. 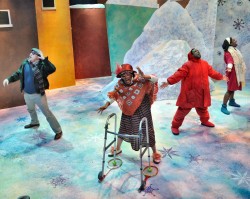 The cast of 'The Snowy Day.' Photo by Bruce Douglas.

Scenic Designer Timothy Jones uses large, bold-colored slats to resemble apartment buildings, around which sit glittery snow banks with oversized snowflakes subtly painted onto them. Sound Effects by Kenny Neal are creative, ranging from the muffled crunch one makes while walking through snow, howling winds, and busy city sounds, although at times they are sharply cut off instead of fading away, which unfortunately jolts the audience out of the illusion. I found the lighting element, designed by Jason Aufdem-Brinke, to be very pleasant. Besides the expected range given in order to set the tone, there is a lovely scene where illuminated, revolving snowflakes are used to give the sense of a snowfall.

Costume Designer Deb Sivigny uses bright colors for the characters, most noticeably the beaming yellow gown and matching headdress worn by Mother Sun. A puffy white clown wig is cleverly used to help create a snowman, while yellow and black pieces work together to fashion a lively bird. The main character, Peter (an outstanding and energetic Alan Wiggins) wears a red snowsuit throughout the play. While this particular costume is a dead-on match for the book version, I wish they had chosen a variation, as it was very large and hung off the actor, completely obscuring his form, and it hindered the upbeat and original choreography by Kurt Boehm. Wiggins is a talented dancer and singer and it shows, but only through hints of what we could see through the bulky, billowy costume. 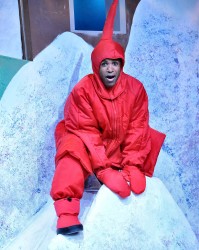 Alan Wiggins stars as Peter in 'The Snowy Day.' Photo by Bruce Douglas.

It’s Peter’s first snowfall, and both he and his Ma, played by Giselle LeBeau-Gant, are very excited. LeBeau-Gant sings about the joys of snow while her son hastily gets ready to go explore. Once outside, Peter urges his fellow neighbors to come play with him. These characters (the grumpy Mrs. Krinkle, played by an energetic Lauren Dupree, and the anxious Arnold, played by Calvin McCullough) are shown as puppets through their windows, and then cleverly emerge as the actors later on. With both refusing to come out, Peter will just have to create his own fun, and starts out on an adventure, where a Snow Pirate is following him (also Giselle LeBeau-Gant). Peter makes a couple new friends on his adventure; a worried snowman named Harold (also Calvin McCullough) that must make it to the north pole before he melts, and a cheerful songbird named Roberta (also Lauren Dupree) whose trip south is delayed due to her fear of flying. These very different characters sing about their unlikely friendship, and face on the snowy day together. Will they make it to their destinations, while keeping a safe distance from the snow pirate?

It was great seeing that the children in the audience really loving The Snowy Day.  They danced along in the aisles, and excitedly shouted advice to the characters from their seats, and their parents seemed to get just as much enjoyment watching their children have a wonderful time!

Running Time: 60 minutes, without an intermission. 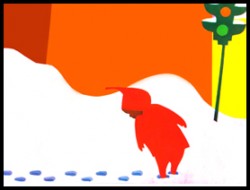