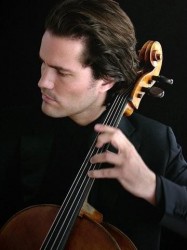 I don’t know that it is fair to review a concert featuring one of this reviewer’s favorite musicians, but if it is not, then nobody could have reviewed the January 7, 2012, National Philharmonic concert at Strathmore. Zuill Bailey tends to win most people over on his first bow stroke, if not sooner, and last night was no exception.

Bailey doesn’t play notes. He plays sounds and feelings. His cello is as beautiful as he is, but after watching him play it for awhile, it almost seems as if he becomes one with it and that he is dancing freely as an extension of it. His performance is simply a joyous experience for all. A living lesson in phrasing, his every stroke begins with absolute clarity. His fingers are fast and articulate, and he plays with a wonderful combination of strength and smoothness. He has the most amazing sustained bowings, and a tremendous dynamic range even within one note.

I love to watch and hear a musician who is not afraid to play almost over the edge, and Bailey does this. He knows the rules, but he pushes them whenever he chooses to do so. I know I heard Haydn’s Cello Concerto in C Major last night, but it was served with Bailey’s seasoning. I loved it, and based on the spontaneous standing ovation that began before his last sound ended, so did the rest of the audience.

Another pleasant surprise of the evening came in the form of the opening remarks of Piotr Gajewski, who conducts the National Philharmonic – perhaps the best I have ever heard from him. It was nice to see him so relaxed as he shared a humorous story about the opening Grosse Fuge by Beethoven, a complicated piece composed by Beethoven after he was completely deaf. Gajewski took intelligent liberties with Beethoven’s suggested dynamics for the work, which as written were pretty much limited to loud and really loud. Between the confusion of some of the harmonies and the dynamics preferred by Beethoven, a number of listeners have commented that had Beethoven been able to hear what he composed, perhaps he would have made revisions. I enjoyed the piece, but I did find myself thinking that listening to it would be much different than composing it, and wondering what Beethoven was thinking and feeling as he put this music to paper. 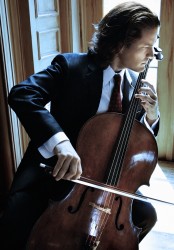 The concert closed with Mozart’s Jupiter Symphony, his very last. It was particularly fun to watch Gajewski conduct this famous work sans score and baton. The orchestra was at its best during this piece, and their performance again brought the Strathmore crowd to its feet with applause.

It was very nice to see so many children and families in the audience of this concert. National Philharmonic is to be congratulated for its All Kids, All Free program, which provides free tickets to all children age seventeen and under. I can’t think of a better way for teenage friends and families with kids to enjoy a wonderful time together.

Thanks to National Philharmonic for making this program possible.

For all Zuill Baily fans, I look forward to seeing you on Sunday, April 29, 2012, at 7:30 PM, as the Perlman/Quint/Bailey Trio returns to the Washington for a performance at the Kreeger JCC of Greater Washington. Tickets are available online.

Watch and listen to Zuill Bailey play and speak about The Bach Suites in Michael Lawrence’s Bach & Friends.

Watch and Listen to Zuill Bailey and Awadagin Pratt play highlights of Brahms’ Works for Cello and Piano.