‘A Quick 5’ With Elaina Newport

Elaina Newport is the producer, an original cast member, and one of the founders of The Capitol Steps which has been “putting the mock in democracy” for 30 years now. The Capitol Steps is the spot-on political satire group that performs every Friday and Saturday evening in the basement of The Ronald Regan Building, as well as engagements all over the country. Nothing is sacred to The Capitol Steps. When you go to one of their shows you can expect to see any one of your “favorite” political figures being skewered.

Elaina’s characters include Sarah Palin, Nancy Pelosi and Janet Napolitano. Since politics in DC is ever-changing, so does the Steps‘ show every week. Sometimes material goes in on two hours 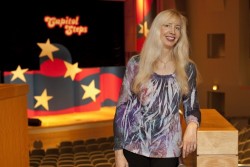 notice. The Capitol Steps always rise to the challenge. Having just recently seen their show I can honestly say it is definitely worth a trip. In DC we tend to forget about some of the attractions that have been here for awhile.  Elaina Newport and everyone at The Capitol Steps deserves a big vote of thanks for keeping us laughing for all that time and that is not a lirty die. Did I mention their latest CD is called Desparate Housemembers?

Were you a performer before starting The Capitol Steps?

Not really. I had studied piano in college but when the Capitol Steps began, we all thought we had serious careers as Senate staffers. We were working for Senator Charles Percy from Illinois (he was one of those moderate Republicans you read about in history books!)  And the first Capitol Steps show was thrown together as entertainment for our office Christmas party. The joke we’ve used for many years is that we had hoped to put on a traditional nativity play, but in all the Congress we couldn’t find three wise men or a virgin! So we put together some song parodies.  And we thought for sure someone would tell us to stop, but no one did, and thirty years later, we’re still going!

What is your criteria for picking the music that you put your song parody lyrics to? 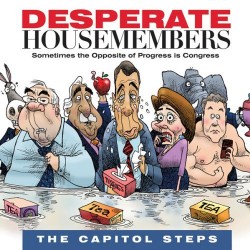 The writing is a constant challenge, and picking the right song is essential (a rhyming dictionary really helps!).  That’s why the Capitol Steps love politicians named “Perry” or “McCain.” Sometimes, a scandal is perfect, like when Herman Cain had his 9-9-9 plan, along with sexual harassment allegations, we wrote “Love Potion Number 9-9-9.” Or when the South Carolina governor happened to have a scandal involving Argentina, and we got to use “Don’t Cry for Me, Argentina”  Or Tiger Woods, for “The Lie of the Tiger.” And sometimes a song is perfect for both the feel of the original and the feel of the subject you’re covering.  For example, when we were thinking of Hillary and Barack working together, it reminded us of “Ebony and Ivory” but we gave it a little twist and it became “Ebony and Ovaries.”

One of your signature pieces is “Lirty Dies?” Who came up with the idea for that and how does the performer learn the backwardness that is called for in the piece?

“Lirty Dies” is definitely a crowd favorite. It’s based on spoonerisms, where you switch the first letters of two words.  Sometimes it works great, like “American Way of Life” becomes “American Lay of Wife.” And we’ve used it for many years to cover political scandals. The first one was back in 1987, when presidential candidate Gary Hart (Hary Gart, in this case) got caught on a sailboat (he sook tail) and we’ve used it for every scandal since then  The performers who learn it have a real challenge – it’s like learning a foreign language but eventually you “thart to stink” that way!

Are there any subjects or people that are off limits to The Capitol Steps and have you ever had a cease and desist for one of your parodies? 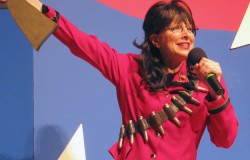 There are some subjects that are difficult…one example that comes to mind is Hurricane Katrina. Nothing funny about that! But even in a difficult time like that, there are politicians who are messing something up (“Brownie, you’re doing a heckuva job”) and government agencies, like FEMA, that are fair game. So, you go after those. And no, we’ve never had a cease and desist.  Parody enjoys a long history in this country and people tend to be good sports, especially when it’s in the spirit of bipartisan fun.

How do you think politics have changed over the past 30 years since you started The Capitol Steps?

The news cycle is so much faster! Now, when someone tweets his underwear, everyone knows about it instantly…and we try to get a song on stage as soon as we can. One of the terrifying things about being a Capitol Steps performer is that you might have to perform a song on very short notice. When Rick Santorum came in second in Iowa, suddenly he was a candidate who needed a song. And we had one the next day! And I will freely admit that sometimes, under these circumstances, the performers might go blank on a lyric. Once, when this happened, the performer turned to the audience and said “You think this is easy?  I just got this song two hours ago!” And of course the audience loved that, because they knew it was something that had just happened in the news. When Osama Bin Laden was buried, the Capitol Steps added a song the next day, to the tune of “Under the Sea.” So, it’s a challenge but we try to keep up with it. Our worst fear is a quietly competent Congress that solves all the problems. But we’re not really very worried.