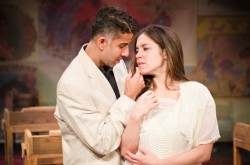 Workers in a cigar factory in Tampa, Florida, in 1929, are heavily influenced by a novel written half a century before and thousands of miles away – the Ana of the play’s title refers to Anna Karenina, the protagonist of Tolstoy’s famous novel of doomed and illicit love. The novel makes its way into the factory through a lector, or reader, who has been hired to read novels to the workers, a tradition brought from Cuba by the Cuban immigrant factor owners, Santiago and Ofelia. Through their new Cuban reader, Juan Julián, Tolstoy’s prose takes up residence in the minds and lives of the factory workers, bringing about unexpected change.

From the opening scene, where Santiago writes down the debts he owes on the bottom of his half-brother’s shoe, the play examines the power of text and language.   A poetic playwright, Cruz demonstrates amply the power of lyrical speech. The language of the English version of the play (flashed in surtitles on a screen above the stage) is simple but intensely poetic. The Spanish version, which Cruz translated from English himself, along with Nacho Artime, is polysyllabic, muscular, and flowing, the kind of language whose poetry one can ride for sentences at a time.

Discussing the narrative turns of Anna Karenina, Cruz’ characters find an oblique way to speak about their own lives and needs, which would otherwise have gone unaddressed. With that discussion comes the possibility of exploring solutions.   Tolstoy’s language also seems to have a leavening effect on the language of Cruz’s characters. Marela, the youngest – who wets her pants when she sees the new lector, with a decidedly unpoetic “Sorry, Mama, I couldn’t hold it in” – finds her way to poetic imagination after a few chapters of Tolstoy, insisting that that bicycles dream of becoming boys, umbrellas dream of becoming the rain, pearls dream of becoming women, and the chair dreams of becoming a gazelle and running back into the forest. 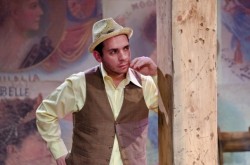 José Carrasquillo’s direction minimizes intrusions on the language. Sound and lighting are unobtrusive, and Tony Cisek’s set – the interior of a cigar factory suggested by cigar-rolling desks, grimy windows, and a podium – is simple and functional.

Marian Licha (Ofelia) and Hugo Medrano (Santiago), compelling and believable, are the play’s backbone. The foreplay between Verónica del Cerro (Conchita) and Oscar Ceville (Juan Julián, her lover) is steamy, tender, and tense. Monalisa Arias stands out as Marela, child-like, fanciful, and, in the end, dominated and subdued. José Guzmán gives a fine performance as Conchita’s machista, unfaithful, and jealous husband Palomo.

Unlike Anna Karenina, the play does not lend itself to intense, life-changing discussions. The darker tones of the play are not developed as fully as they might have been, and the poetic language at times lifts us out of the moment, out of the story.

While Ana en el Trópico does not afford an evening of great emotional depth -the play wraps up a little too cheerfully and neatly – it does offer a beautiful time-out, a time for listening, a time to experience the power of language and contemplate the importance that shared stories can have.

Running Time is about 2 hours, with a 15-minute intermission.