Astro Boy and the God of Comics at The Studio Theatre

For a rousing, invigorating and affectionate look at the great Japanese animator Osamu Tezuka and his creation, Astro Boy, head on over to Studio Theatre’s 2ndStage’s whimsical intergalactic premiere of Astro Boy and the God of Comics. The audacious brainchild of Creator/Director Natsu Onoda Power, this startlingly original play has a dynamic view of the fluidity of drawing, the consequences of radiation, and even takes swipes at Madison Avenue. 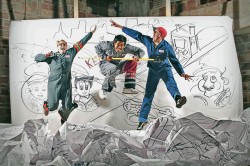 Jamie Gahlon, JB Tadena, and Joe Brack in ‘Astro Boy and the God of Comics.’ Photo by Scott Suchman.

The direction by Natsu Onoda Power is extremely assured in tone – in fact, the play is a triumph of style and tone. Creatively told in ten distinct episodes of reverse chronological order, this fascinating play unfolds with state-of-the-art technology.  Multiple rear projections enhance each component of the play and the stage is framed as an old television set. Kudos to Projections Designer Jared Mezzocchi, Set Designer Luciana Stecconi, and Cartoonist Alex Thomas. Sound Design and Compositions by Evan Rogers underscore the action with just the right flavor. 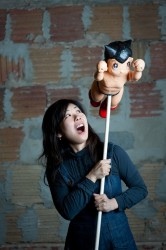 A very talented ensemble cast of eight works together well in this original effort. Standouts are Karen O’Connell  (Astro Boy), Clark Young (Tezuka) and JB Tadena (Maestro). O’Connell possesses a wide-eyed sense of wonder that is perfectly suited for the role of the soaring hero. Natsu Onada Power occasionally has her cast run down the aisles of the audience and this lends an effective interactive touch to the proceedings.

The play is only 70 minutes long with no intermission, and the brevity of this work is very suitable for the compressed, episodic nature of this piece. Natsu Onada Power does a terrific job making sure that this piece never veers into camp which it could easily do. Instead, the play is an engaging mix of science fiction send-up, pop culture, and retro nostalgia.

This production will  please the general theatrgoer as well as the comic aficionados among us. Astro Boy soars!