If I were to make a movie about Marin Alsop, I think it would have to be a road trip kind of movie, and I mean this as a very big compliment. I really don’t believe many artists can survive professionally without at least a healthy ego. After all, competition and critics are part of the game for performing musicians, conductors, and composers. The problem with egos that get too big though is that if the image that is trying to be upheld is perfection, artists can end up so trapped in the image that they stop taking chances. 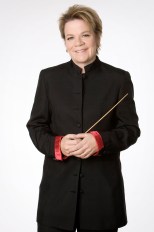 Marin Alsop certainly has a healthy ego, but I think what really keeps her out in front of the many who simply follow her is that she is a courageous and ever curious explorer focused on the fun of a shared journey and the thrill of  experiencing exciting new  destinations. She knows she is playing with the best of the best and that there is no guaranteed perfection for anybody, and so with a leap of faith she goes where others fear to tread.

Think about it, or just take a look at the Baltimore Symphony Orchestra programs Marin has personally conducted over the past five years. She’s all over the place, and oh the places she doth go. Some places are so familiar and fun that she can find them in her sleep. She arrives at others with intelligent use of a GPS. And when the maps have yet to be created, she simply makes her own path. For those who go along for the ride, including both orchestra members and audience, it really comes down to trust. She can’t go without them, and they can’t go without her. Those concerned about a bump in the road, a detour, driving in the dark or a storm, or even having to stop to repair or replace an unexpected flat tire best stay home, but for the brave and bold souls who choose to think and dream beyond these anchors of existence, the experience is going to be one that others will never be able to fathom. 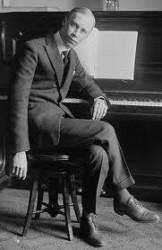 On Friday night at Strathmore, it was Destination Prokofiev: Symphony No. 5, an off-the-cuff performance by the BSO. I listen to music constantly, and I have also heard this work performed live many times. I enjoyed it the most Friday night however, and I think this is the case because I had just been listening to Marin talk about the man who composed it. The musicians of the BSO had just demonstrated the growth that Prokofiev had shown as a composer between his first symphony and this, his fifth. My memory of who Prokofiev was as a man was refreshed.  I had just learned new things about who he was as a boy, the happy, precocious, and much loved child who composed his first opera The Giant, when he was just eight years old. I was thinking about the insecurities of a composer so threatened by the talents of his contemporaries that he could not enjoy his own, and the sadness of a man so in need of love and adulation experiencing the misfortune of having even his death overshadowed by worldwide focus on the death of Stalin, who just happened to die on the same day. 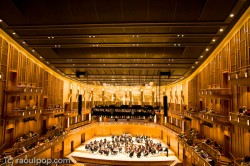 BSO at The Music Center at Strathmore.

The BSO is one great orchestra, and they are always up for a great road trip. To say its members are accomplished musicians is an understatement, and so I do not feel great purpose in stating that BSO musicians play well. They play fantastically well. What I believe sets them apart, however, is their enthusiastic support of and participation in the road trip experience, and in setting the standard for what it means to be 21stcentury orchestra musicians. They are personally open to musical exploration and also in learning new approaches to forging real and interactive relationships with the audiences who are flocking to their performances because this is the case. BSO audiences do want to learn. They love the guided live learning experience that Marin and the BSO musicians provide in every concert, and they really can’t get enough of the sincere relationship-based approach to music that they know means as much to Marin and the BSO musicians as it does to them.