Federico García Lorca’s Blood Wedding is a very Spanish story of unrequited love, violence, and tension between two families. The story follows the plight of a Mother (never named) that has lost many a family member to violence. Her son, the Groom (never named), and his Bride (also never named) are entering into marriage in rural Spain. Leonardo, a former suitor of the Bride (who still has some feelings for him – complicated as they may be), attends the wedding and tensions escalate to the point where violence is viewed as the only option for both the young men to get what they want. 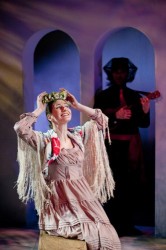 Constellation Theatre Company is currently presenting Tanya Ronder’s modern translation of this play, first staged in Madrid in 1933 and then in other major Western cities. It’s a bold choice, to be sure, to stray away from the ‘innately Spanish’ sensibility of the original – the language and the imagery it evokes, the Andalucian cultural undertones, and the family dynamics at play. However, under the direction of Shirley Serotsky, Lorca’s simple yet powerful story does get presented in such a way that is accessible to modern, American audiences of all cultural backgrounds. It’s nicely paced and presented and makes for a powerful evening of theatre.

It’s rather easy to understand why Ronder’s translation has gained traction and why Serotsky chose to use it – it melds the traditional with the modern. The general themes of love, lust, passion, violence, desire, and death still resonate with us today – no matter if we are located in Andalucía, Spain or Washington, DC – and this translation still allows those themes to focus the story. Having read the original in Spanish, I did certainly miss the evocative imagery present in the original text.   Those images, at times, did not necessarily come through in this translation – whether intentional or not. This situation is particularly evident in the final scenes where the central characters are expected to deal with the aftermath of a violent act of revenge.That said, there is still a flavor of Spain in this production through Kendra Rai’s costuming (mantilla shawls and many red and black hues are ever present on the stage), and Lisi Stoessel’s simple one unit set design depicting various locations in rural Spain from a house, to a church, to a cemetery. Having traversed much of Southern Spain in college, the set reminds me of the unique architecture in that area. White hues abound as one would expect.

What sets this production apart is the innovative use of music. Behzad Habibzai’s flamenco guitar playing is extraordinary and adds a much needed ambience to the powerful play. He plays Mariano Vales’ original compositions (which are equally brilliant) with much fervor. Like the original, this production incorporates several songs. While the singing is, at times, uneven, the emotion and meaning behind the songs about marriage, love, and death prevail. Toni Rae Brotons (Mother-In-Law), Natalie Pyle Smith (Wife), and Mia Branco (Girl) are particularly successful with the singing. 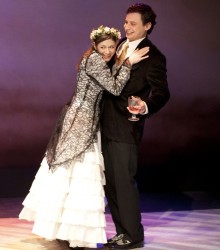 Constellation has chosen to use a non-traditional approach to casting this play – whether this choice is appropriate for a play depicting families in a very specific location is debatable and a matter of personal preference. Generally speaking, however, there is a considerable amount of talent on the stage.  The strongest actors in the cast are also some of the youngest – from Mark Halpern (Groom) and Dylan Myers (Leonardo) to Victoria Reinsel (Bride) and Julie Garner (Servant). Halpern has a certain likeability that is perfect for the unassuming Groom. Myers is both intimidating and passionate. Reinsel has, perhaps, the most difficult task in portraying a timid girl and one who is conflicted about love and prone to heavy emotion  She does so with considerable ease and presence. Her emotional outbursts, thankfully, aren’t overacted to the point where they seem unnatural.  Garner brings a nice sense of comedy and enthusiasm to her role – a desirable thing in such a ‘heavy’ play.

Matthew Pauli has the daunting task of portraying Death. He meets this formidable challenge quite well – maintaining a quiet, leering presence when necessary. His singing can be uneven at times, but he does quite well with the string instrument.   Anastasia Wilson, too, has the difficult task of portraying a concept rather than a person in the latter half of the show. She moves well as the Moon and serves as an integral piece to the show’s bloody end.

Other casting choices are less successful. Deidra LaWan Starnes portrays a Spanish Mother – one who loves her family very much and is still reeling from her many losses of loved ones. Some of her acting choices in key emotional scenes are very overwrought to the point where they can take the audience out the moment of the story because they seem over-the-top and a bit unnatural. This is particularly evident when she grapples with the present and past deaths in her family. However, she does a nice job in expressing a love for her son (the Groom) and desire to keep him safe from all harm. She appropriately evokes the strong influence a mother plays in most Spanish families. Will Cook portrays the Bride’s Father with some stiffness. It is sometimes difficult to see the connection between him and his daughter, in particular.

Overall, this play is a difficult piece. Constellation should be commended for taking on the challenge of presenting it. I recommend this production for some fine performances, its physical production concept, and for introducing American audiences to Lorca’s powerful story of love and loss.