Chapter Two at The Colonial Players

Colonial Players presents the fourth show in their 63rd season – Chapter Two – a Neil Simon comedy. Chapter Two presents a whirlwind romance, a grease lightning wedding, and the tempestuous storms that arise in their wake as a recent widower, George, who is far from over his dead wife falls in love with a woman, Jennie, fresh off of a divorce from a bad six-year marriage. Add George’s meddlesome brother Leo and Jennie’s pushy friend Faye and it’s a recipe for a comedic disaster of romance, rotten moments and real feelings.

Directed by Gwen Morton, this particular production takes the setting to modern times, the entire show spent between George’s apartment and Jennie’s apartment, both of which share one in-the-round stage, split diagonally across the space. Morton takes a few clever liberties in the script to really make the show have a more modern feel. When Faye’s (Laura Ivey) character makes her speech about having tragic dark men for Jennie (Jo Sullivan) to fix, she lists JFK, Professor Snape, and Charlie Sheen as her reference points, really giving the audience the idea that we’re in the present, with topical things that are relevant to our modern time. 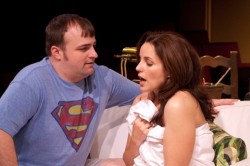 The lavishly furnished apartments come from the mind of Scenic Designer Edd Miller. There is a distinctive difference between George’s apartment, a more distinguished presence about the space with wooden furniture, leather arm chairs and sparse decorations – versus Jennie’s apartment which is furnished in modern sterile white accented with green plants a-plenty. And while these furnishings create two clear spatial allocations for the characters it makes the stage appear cramped and crowded. Perhaps just one distinctive furnishing for each apartment, rather than the bench, the desk, the bookshelf, the two chairs and the fireplace on George’s half, and the whole island kitchen, the book shelf, large couch, etc., on Jennie’s side. Surprisingly enough, however, the actors manage to maneuver without difficulty through the narrow spaces created with all of the excess furniture.

The show is lengthy, nearly three hours in duration, and I believe it could have been a much tighter show. The pacing and speed at which the show progresses is extremely sluggish and not because of the acting – but because of the pauses and breaks between the scenes. There is no furniture moving during scene changes because the set is stationary, but the actors seem to have difficulty determining when they are entering various scenes. There are moments between leaving George’s apartment and then entering Jennie’s apartment where the lights go completely dark and there would be a pause, as if they were trying to figure out whose turn it was to enter the stage. There are many instances where a tightening of movement between shifts in scenes would have sped the play along and made it more enjoyable. As lights in one half of the stage are going down to take the focus away from that apartment – lights should be coming up in the other apartment – with the other character entering as the previous one exited.

The acting is a bit mismatched. George (Richard McGraw) and Leo (Jeff Sprague) are meant to be brothers who are close to one another, as indicated by the text and the way Leo’s apparent concern is a consistent theme throughout the show. But these two gentlemen respond to one another like slightly familiar strangers rather than family while their dialogue exchanges indicate otherwise. Even when Sprague goes to hug McGraw the physical interactions seems strained and forced as if it were painful to do so. The two females, Jennie (Jo Sullivan) and Faye (Laura Ivey) who are only meant to be friends seem more like sisters, tittering closely, constantly in each other’s business, with warm emotions and depth to their characters’ discussions. Sullivan and Ivey really listen to each other when they speak, responding to what is said, reacting to what is happening. – whereas Sprague and McGraw sound as if they are reading lines to one another – lacking the depth and emotion that these characters require.

The chemistry bubbles to life a little bit between George (McGraw) and Jennie (Sullivan) though it seems mostly one-sided. Sullivan’s portrayal delves deep into the emotional psyche of her character, letting the wounds and the accomplishments rise to the surface. She displays her emotions like raw paintings upon her face, especially during her breakdown moment late in act II. McGraw stays mostly on the surface of his character, never really crafting the dynamic nature of a man whose conflicted over his dead wife while moving on quickly with a new woman. McGraw does, however, find some truth to his characters emotions late in act II when he and Sullivan begin to tear each other apart after a terrible honeymoon. 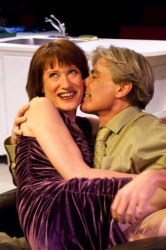 There are just too many moments that feel false and contrived – the kisses of the affair shared between Faye (Ivey) and Leo (Sprague) in particular come to mind. Ivey exposes her characters insecurities about the affair, having a nervous posture and quirks about her movement even her voice changes pitches frequently in this scene. Sprague acts more like a sponge, absorbing everything that Ivey puts out, and gently retaining it rather than reflecting it back. When they kiss and are then interrupted by Jennie (Sullivan) they pull apart and react to the interruption before she’s even fully in the room to acknowledge that she’s seen them kissing – giving the whole scene an over-rehearsed contrived feeling.

The relationship that reflects the best emotional depth of these characters is the friendship between Jennie (Sullivan) and Faye (Ivey.) While we don’t get to focus on this as much, they are real believable moments shared between the two of them.

Running Time:Twohours and 45 minutes, with one intermission.